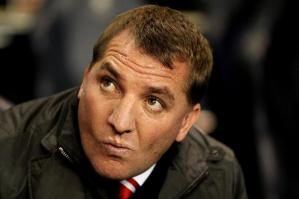 It seemed like the dream move for Brendan Rodgers. He had taken Swansea as far as they could go, sitting in England’s top division, fairly secure in their place within the league. Rodgers had worked hard on building a squad capable of getting and staying there but now was the time to move on. Move to a club capable of winning silverware, capable of challenging in the league for honours, capable of playing in Europe. The Liverpool job was perfect, a bigger club than Swansea, with more pedigree and ready to compete. But now nine months in to the role, Liverpool have only one chance of winning any silverware this season and it would take a miracle for it to occur.

Sitting 8th in the Premiership, the only competition that they are still competing in after being knocked out of the rest, they lie a massive 29 points behind leaders Manchester United with only 11 games left to play. His best hope is for the team to finish strongly and grab a champions league or Europa League spot to guarantee European football next year. If they can do this, they may just encounter Swansea along the way who secured their place in Europe next season with a stunning 5-0 League Cup final win over Bradford, their first trophy in their 101 year history. Sunday’s game must have been difficult to watch for Rodgers, who firmly believed that Swansea had peaked when he left the job. But current coach Michael Laudrup saw something else, he saw potential for growth and exploited it. Granted Swansea have ridden their luck a little in the competitions but they deserved the win after a fantastic run that saw them dispatch Chelsea, Middlesbrough and Rodger’s Liverpool along the way.

Laudrup has bought well, preferring to spend on players he knew well from his days in Spain – Michu, Hernandez, de Guzman who all fit well with the system Swansea play.  Michu has been a revelation for the Swans since his arrival and has inspired the League Cup run, scoring three goals in six games, including a strike in Sunday’s cup final. At £2 million, he is the bargain of the season and makes Liverpool’s £10.5 million signing of Fabio Borini look like an expensive mistake. But this is a club that shelled out £35 million for Andy Carroll, only to throw him on the scrap heap just over a year later. Rodgers has had considerably more to spend this year than Laudrup but the Dane is the one that looks like he has delivered. Rodgers will insist its a building process at Liverpool but the pressure will be on him now to secure a european slot by the end of the season, or he may be looking for a job come the summer. With Swansea only a point behind them, it adds another dimension to the challenge Rodgers faces. If Swansea are to overhaul Liverpool and finish above them in the league, it will only add further misery to Rodgers year which started with so much promise.

Liverpool’s board have been quiet on their manager and have not come out with the public vote of confidence. Owner John Henry holds his cards close to his chest at all times but has not been discreet about the fact that Rodgers was not his first choice. Wigan’s Roberto Martinez topped that list and was spotted in deep conversations with Henry just a few weeks before Rodgers was appointed. The talks were public and although Martinez could not agree  a deal (rumoured to have been offered but rejected for personal reasons by Martinez), its understood that the Wigan boss is still looking for his next job and a step up in that. If Rodgers ends the season unsuccessfully outside of the European places, it could be a swift change in the summer to axe him and bring in Martinez, this time on a contract that works.

But there is maybe another option in the form of Rodgers replacement at Swansea, Michael Laudrup. As his reputation grows in England as a coach, he too could become a potential candidate for the job. Leading an unfancied Swansea side to cup glory will not have gone unrecognised by the bigger clubs in the league, including Liverpool. Laudrup has the international pedigree as a player to attract the bigger names to Liverpool than Rodgers has been unable to convince to come. He is also likely to be handed a larger pot of money to play with than he has at Swansea so his eye for a bargain could provide Liverpool with a whole batch of new players for £30+ million, rather than the three that Rodgers managed to get in for the same amount. Laudrup would appease the fans as well who are starting to grow tired of Rodgers and his excuses. Rodgers has 11 games left to secure his job but he will be well aware that his old club Swansea and Laudrup are very much on their trail, gunning for Liverpool and the coach.