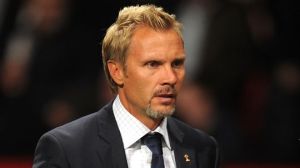 Saturday’s stunning collapse by Hamburg to a rampant Bayern Munich has highlighted to the world what most in Germany have been watching for some time. One of the most recognised names in Germany and European football, Hamburg has fallen on darker days recently and has been unable to compete with the likes of Dortmund, Leverkusen and Bayern in recent seasons as they raced to the Bundesliga title. As the only team to have features in all 49 Bundesliga seasons and having won the competition three times in its history, the Hamburg fans have been praying since 1983 for a return to the top spot but to no avail. The 9-2 scoreline four days ago to an under strength Bayern side, who rested key players like David Alaba, Thomas Muller, Franck Ribery, Mario Gomez and Mario Mandzukic ahead of last nights Champions League tie with Juventus, was embarrassing to say the least for this once great club.

Currently sitting ninth in the league, Hamburg are heading in the wrong direction after only one win and one draw in their last five. Defensively they are all over the place having conceded sixteen goals in the same period, nine of which came against title contenders Munich but another five against mid table club Hannover 96. Hamburg’s problems seem to stem from an inability to come out of the blocks running, often losing early goals which destroys the teams momentum and puts them immediately on the back foot. Going in 5-0 down to Munich and 3-1 down to Hannover at half time, coach Thorsten Fink seemed unable to stop the rot as Hamburg again collapsed in both games in the second half conceding more goals. It has been a Jekyll and Hyde season for the club so far with important wins against Borussia Dortmund (twice) and Schalke early on in the season undermined by poor performances and defeats against lower opposition like Augsburg and Fortuna Düsseldorf.

Some of the blame for these games has been aimed at the reluctance of senior players like Rafael Van der Vaar, Marcell Jansen and Heiko Westermann to step up and take control of the match. Van der Vaart in particular, who returned to the club this summer after spells with Real Madrid and Tottenham, was brought in specifically to provide the spark and creativity needed to drive the team forward but so far has failed to do so. Off field problems with his wife may have attributed to this drop in form but as an experienced Dutch internationalist who has played at the highest level, off field dramas should not be a factor. But others blame Fink for deploying the wrong tactics in games and ultimately sending his side out to fail. It was no surprise that Fink chose to close down Bayern’s wide players who he saw as their main threat and directed his team to team mark them when in possession. However by doing so, he graciously opened up a massive gap in the centre of the park that Munich exploited to its fullest. Having gone 2-0 down within 19 minutes, Fink could have chosen then to change his approach but continued with his plan, only to see another three goals hit the back of the Hamburg net before the half time whistle. In the second half, changes were made but by that point the game was lost and despite hitting two in return, Hamburg shipped another four before the final whistle.

Fink believes his team are in transition mode and has dismissed openly their chances of ever qualifying for the UEFA cup or the Champions League much to the fans annoyance.  Having taken over in October 2011, Fink has yet to win over the fans and sits currently with a 33% win ratio during his time at the club. Hamburg have the players needed to stay clear of the relegation zone but poor tactics and inexperienced management may cause them to end up there. If Fink cannot correct Hamburg’s slide, it may draw an end to Hamburg’s record as the longest-serving team in the Bundesliga.