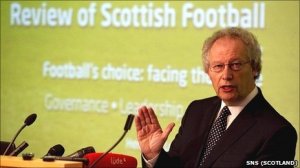 The long drawn out saga over the future of Scottish football appears to be finally at an end with two of the country’s governing bodies – the SPL and the SFL agreeing to join forces in the creation of a new body known as the Scottish Professional Football League. As part of the agreement comes a restructuring of finances across the leagues and the clubs, feeding more money into the lower divisions. By completing negotiations, the SFL has avoided the awkward position it faced with a majority of its members threatening to walk. Stuck between a rock and a hard place, the SFL had no option but to agree to the SPL’s demands in what SFL president Jim Ballantyne is calling “a takeover” rather than a merger:

“We are joining their company, their organization. They have swallowed us up. We could use nice words about it, but it is a takeover. It is very sad that the Scottish Football League has had to be a casualty but unfortunately we were left with one option. Did I want to see the end of the Scottish Football League? Absolutely not. Did I want to see football strive forward? Then yes. It will be for others to decide if this step takes us to where we want to go.”

To be honest, regardless of what Ballantyne calls it, it is about time. The joke situation that has existed in a country of less than 6 million people, with three governing bodies  – the SFA, SPL and SFL all jockeying for top spot and pulling for what is best for them than the game, has made Scottish football a laughing stock. Fans have departed, TV companies are less interested by the season and home grown talent has become a foreign phrase as the three argued over the dominating role.

With the creating of one league governing body, these arguments should die down, however it is still unclear how the new SPFL will interact with the SFA and who out of the two will have the ability to overpower the other. Most will suspect that the SFA will run Scottish football whilst the SPFL will control the leagues but strangely it was the SFA, who announced the creation of a new Lower League that will compete with the Highland league as the two divisions below the Scottish Third, mudding the water somewhat.

Regardless, Scottish football appears to be turning the corner and rebounding from years of neglect and embarrassing internal squabbling, the new league structure, with play offs being introduced between the league, including the lower divisions and a better distribution of money between the teams, the future for Scottish clubs should improve over the next five to ten years. The only regret is that it has taken so long for the three bodies to see sense, stop fighting and focus on what is most important – the future of Scottish football.