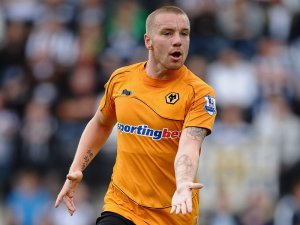 In Germany, fans control the clubs. In a successful model, adopted now by all clubs in the country, the fans have controlling stakes in their clubs which means that they are a part of every decision made, whether that be stadium redevelopment, sponsorships and even player transfers. With an appointed voice on the board, all transfer moves must be approved  in advance of the deal being made, which means that the fans can decide if they feel that they player the manager has chosen is right for the club or not. The same goes for players exiting as fans have the ability to voice their frustration over someone they feel is a bad apple. For Wolves fans, now condemned to League One following relegation last season from the Championship, this would be a dream come true, with several players on their hit list of transfer possibilities. Unfortunately for them, they have no power as such but this hasn’t prevented the Wolves faithful from coming up with another idea of how to sell their unwanted stars.

Displeased fans have singled out former Tottenham midfielder Jamie O’Hara for special treatment and have decided to take matters into their own hands by putting him up for sale on EBay. The auction based bidding site has been used by one disgruntled fan to list the availability of O’Hara and his fellow teammate Roger Johnson, to be sold to the highest bidder. The listing, which was posted early last week and has now been removed, was in response to a comment made by O’Hara that he was too good to be in League One, that he was of Premiership quality and that he wanted to leave. After suffering the humiliation of back to back relegations, the comments were ill timed by the winger who is now feeling the very public backlash to his outburst.

Bidding started at 99 pence with the lister even offering free postage and packaging as well as promising to drive the player to his new destination himself. Bids reached up to £153,900 for O’Hara, who cost the club £5 million in 2011, before the post came down. The lister even promised to throw in defender Roger Johnson into the deal if the minimum bid clause price of £1.50 was met. This is not the first time that the auction site has been used by fans as a way to attract the media’s glare of their distaste of a player. One of the first players to receive this treatment was Keiron Dyer, who in 2004 was listed after telling his then club, Newcastle that he refused to play out of position. One fan, Josh Doherty placed the listing which received bids up to $10 million before the club and Doherty had to come out to reveal that it was a joke. In 2011, an Arsenal fan put Brazilian Denilson up for sale on the site, after the payer failed to live up to his potential following his £3.4 million transfer in 2006. Denilson did eventually leave the club to return to Brazil with Sao Paulo but not until this summer, presumably much to the annoyance of the fan in question. In 2012, Juventus fans decided that they had seen enough of Carvalho De Oliveira Amauri (better known as Amauri) to know that he had to go, so listed him on EBay for sale. Bidding on the unofficial sale, which promised free delivery, no refunds and Juventus full-back Paolo de Ceglie as a sweetener, reached €10 million before the auction for the Italy international was removed from the website.

For O’Hara, the public has spoken and much to his delight, his time at the Molineux stadium appears to be up. After being officially transfer listed by the club this week, alongside teammates Karl Henry, Roger Johnson and Stephen Ward, O’Hara is eyeing his future away from the club and hopefully back in the lucrative Premier League. Unfortunately interest in the player has been nonexistent with manager Kenny Jackett admitting that he has been phoning various clubs but no one is interested. If Jackett and Wolves are unable to find a new club for O’Hara before the transfer window shuts at the end of August, the player could be forced to stay at the club. In that event, O’Hara will have no choice but to offer up a groveling apology to the fans and hope that it’s taken well and doesn’t land himself back on EBay.

Think Jamie is getting a rough ride? Or very much deserved? Let us know on Facebook or Twitter: www.facebook.com/BackOfTheNetBlog or  https://twitter.com/BOTNBlog