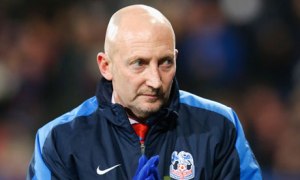 he current Premiership table does not make for interesting reading to Ian Holloway. His Crystal Palace side sits firmly in the bottom three after a series of poor performances and results.  Holloway knows that in this business points are all that counts so will be aware that he is on borrowed time having only delivered three points out of a possible 24 so far. The media vultures are circling, waiting patiently for news to break of his dismissal and unless things improve, they may be feasting on his carcass sooner rather than later.

Following Mondays 4-1 defeat to Fulham, Holloway felt the heat from chairman Steve Parish as the two met for an hour to debrief what had happened. Parish and Holloway meet regularly but this meeting more than any signifies that Holloway’s position is under immediate review in advance of some potential changes. Palace, who were one of three teams promoted last season from the Championship, have the odds stack firmly against their survival as history favours an immediate return from where the trio came. November will be a significant month for Palace with winnable ties against Hull, West Brom and Norwich to come; Holloway will know that he needs to stop the rot before the rot stops him. How long before Parish is forced to pull the rip cord on Holloways reign and parachute in a new boss in an attempt to change the team’s fortunes, is unknown. With Palace making their worst start to a top flight season since 1980 and with the ground fast approaching, it may be sooner than Holloway hopes.

If Parish does exercise his right to ring in the changes, it may be to little effect as bitter truth is that the current Palace squad is not strong enough to survive. The squad lacks depth in quality, despite Holloway and Parish having an active summer by bringing in 17 new players. With that volume of new faces entering the squad, they need time to gel and get to know each other, something that Palace don’t have the luxury of.  Questions will be asked of the types of players brought into the club, in particular the acquisitions of strike trio –  Marouane Chamakh (Arsenal), Cameron Jerome (Stoke) and Jimmy Kebe (Reading), who have all failed to fire in the Premiership before. The need for new forward options was heightened with the departure of star player Wilfred Zaha and the loss of top goal scorer Glenn Murray to long term injury, but the replacements don’t exactly match up. So far the trio has scored only one goal between them (Chamakh vs. Stoke) with record signing Dwight Gayle now being looked upon as Palace’s goal threat. In truth Palace this season have been misfiring across the board, having only scored 6 goals so far (third worst in the league behind Stoke and Sunderland) and have shipped 17 (second worst behind Sunderland). The problems are mounting up for Holloway to solve – goalkeeper Julian Speroni looks dazed and confused at this level, his back four lacks a true leader with Mariappa and Delaney often caught out of position, and upfront his strikers lack the confidence and conviction in their abilities to score. The only bright spark so far has been the form of midfield duo, captain Mile Jedinak and young Spanish star Jose Campana who have impressed with their vision and all around play. But the duo look outnumbered on the pitch and are often forced back into defence to cover for the out of position centre back pairing. Holloway is guilty of tinkering too much with his side, unable to stick to a solid formation for more than two games in a row which is causing further chaos in the ranks.

The only thing that is going for Holloway is that he knows this squad well; after all it’s the squad he built. And he still has the faith of the players that believe that he can help turn things around. Having only arrived in November 2013, replacing Dougie Freeman who left for Bolton, Holloway had an immediate effect, steering the club up the table and into the playoff places. They dispatched Brighton then Watford to secure a return to England’s top division and won Holloway much deserved praise from various circles for the way he had pulled the squad together and inspired them to victory. But last season’s glory looks like a long way away as Palace try to step up their game in England’s top division. Holloway knows he must get his team to raise their game across all areas of the pitch if they are to survive. He is a long way off the needed 40 points for survival and 30 games left in the season, Palace need to start winning soon to be in with a chance, with or without Holloway at the helm.