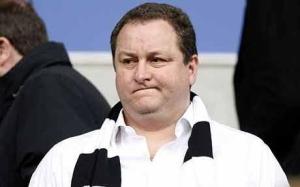 It was yet another bizarre weekend for Newcastle which this time didn’t involve Joe Kinnear. Owner Mike Ashley is not exactly loved at St James, with many fans feeling that he is not putting the clubs best interests at heart with his unwillingness to sign new players and the strange decisions he is making from appointing Kinnear, rebranding the stadium or signing away the shirt sponsorship rights to pay loan firm Wonga. Fans group Time 4 Change held the demonstration before the club’s 2-2 draw with Liverpool last week and further protests took place yesterday at the Tyne Wear derby. But this past week, former Newcastle striker Michael Own has jumped to his defence claiming the owner is doing a good job, despite difficult circumstances.

The former Liverpool, Real Madrid and England striker, who spent four injury ravaged years at St James before leaving on a free to join Manchester United, was quoted as saying that Ashley has done well at the club, more than he is receiving credit for. Owen continued by saying that Newcastle fans have less than realistic expectations for what their club should be achieving. His comments will not have endeared him to the Geordie faithful, who already have a poor opinion of the player following his time at the club. Owen failed to perform at Newcastle, hindered by poor form and lengthy layoffs, all whilst being paid a considerable wage by the club. Whilst not Owen’s fault, he did little to give back to the club that had supported him, eventually leaving on a free to United as Newcastle were relegated to the Championship. The comments come on the back of a painful 2-1 defeat to arch rivals Sunderland at the weekend. Newcastle performed well against their neighbours but there lack of quality throughout the squad in particular the substitutes was apparent. The introduction of brothers Shola and Sammy Ameobi as well as misfiring Papiss Cisse in the second half did little to enforce Newcastle’s authority on the game allowing Sunderland to come back into the match before Borini’s 25 yard screamer won the game for Gus Poyet’s men.

Newcastle squad problems were apparent as the team lined up. Defensive injuries ruled out captain Fabricio Coloccini and Steven Taylor whilst Mapou Yanga Mbiwa was serving a suspension following his dismissal at Liverpool. That meant that young Paul Dummett, last week’s star player, partnered Mike Williamson at centre back. But it wasn’t going to be an easy day for the 19 year old left back, who found it tough going against the powerful Sunderland strike pairing of Steven Fletcher and Jozy Altidore. It’s an ongoing problem at Newcastle, with a squad that is too slight to cope with the physicality of the Premiership. Players like Sammy Ameobi, Pappa Cisse, Gabriel Obertan and Dummett are good examples of technical players who struggle when faced with a one on one battle for the ball. Cisse in particular is failing to cope in his second full season at the club. Having exploded onto the scene in January 2012 after his move for Frieburg (Cisse hit 13 goals in 14 games), defenders now appear to have figured out how to stop him and the player is now in a barren spell that has seen him fail to score in the league since March. The arrival of Loic Remy from QPR on loan, has added more weight and strength to the Newcastle front line but one player cannot change a clubs fortunes on his own. Newcastle needs to invest in strong physical players, like Chieck Tiote, if they are to seriously challenge for honours.

The criticism for lack of transfer activity has lain mostly at the feet of bumbling director of football Joe Kinnear but without funds to acquire players, his job becomes obsolete. Ashley has supported the club financially in the past but his apparent reluctance this summer to spend says a lot about his long term plans. No longer comfortable bankrolling Newcastle, the sports direct owner appeared to be edging towards recouping some of the funds he has given to the club. Making them self sufficient and spending only what they raise from ticket, merchandise and player sales will allow any profits to be split between the club and owner. The move has enraged fans, who want to see their club continue to grow and eventually challenge for trophies. Honours that Owen believes Newcastle fans should expect to the club to be challenging for. Whilst he may have a point about Ashley, in terms of being given more credit for the things he has done (stability with Pardew, improved scouting network, strong base line of players), Owen is off base with his believes that Newcastle shouldn’t be challenging for trophies. If Swansea and Wigan taught us anything last year is that the cup competitions in England are anyone’s game, if you believe you can win it. Whilst the Premiership may be a distant dream, Newcastle are still in the FA Cup and League Cup so have a chance at silverware like everyone else.