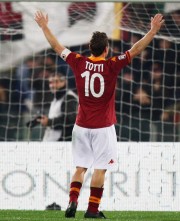 The Italian media is running out of superlatives for Roma’s Francesco Totti and it’s not hard to understand why. At 37 years old, the player called King of Rome by the Italian media has turned back the years and is playing some of the best football of his career. His efforts have inspired Roma to their best ever start in Serie A and turned them into genuine title challengers. Roma sit three points behind leaders Juventus and are so far unbeaten in the league, the only team in Serie A to hold this record. Despite four draws in their last five games, Roma continue to defy the critics who wrote them off at the start of the season.

Credit for this revival must be given to Totti and the steps he has gone to in order to prolong his career. The player is in the best shape of his life mostly due to a fish based diet that has kept him lean and able to sculpt his physique more to suit the physicality’s of the modern game. He has found the hunger that used to burn so brightly behind his eyes and is playing with a freedom that is befitting a man of his talents.  New coach Rudi Garcia took what he saw as a calculated risk when he took over in the summer by building his team around Totti. Most coaches would have looked at the aging former internationalist with several niggling injuries to his name and tossed him aside with little thought. But the spark and flair was still there, locked up under heavy chains imposed on Totti by previous regimes. Releasing him lifted the weight off of Totti’s shoulders and has allowed him to play. Garcia smartly dropped Totti back from his usual striker position into an attacking midfielder/playmaker role, much to the players delight.

Totti now controls the game, feeding balls left, right and centre neatly yet accurately onto the toes of on rushing teammates. He can still score, as demonstrated this season against Inter and Parma but without having to run as much as he would have done in a striker role. He can conserve his energy until the right moment, then attack the ball with a renewed vigour and determination. As part of his new role, his teammates are benefiting from his vision and ability to create something from nothing. In particular former Arsenal winger Gervinho is profiting the most and looks more and more like the player he was at Lillie and the one Arsenal thought they were buying. Similarly players like Miralem Pjanic, Alessandro Florenzi and Adem Ljajic have managed to find more space and have increased opportunities to score thanks to Totti’s selfless set up play. With 6 assists to his name so far, Totti is on course to exceed his best ever total of 12 in a season, highlighting how well he is playing. He makes Roma tick, and Roma are appreciative of it.

At 37, Totti’s chances of playing in another World Cup should be all but buried. Italy coach Cesare Prandelli has other options to choose from after all but none can change a game like Totti can. So should he be part of the squad that goes to Brazil next year? If he stays in good shape and continues to play a fundamental role in Roma’s season, is there room for him on the plane? The question that Prandelli has to ask is can he afford to leave him at home or will it come back to haunt him as the tournament gets underway? Don’t be surprised to see Totti take the pitch for Italy in their opening game against England next June. Nothing should surprise us anymore when it comes to Totti.