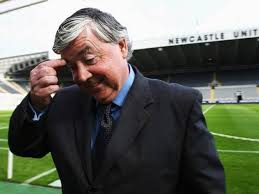 There was always going to be fallout from Newcastle’s failings in the transfer market but the fans would never have thought that they would get their wish and see Joe Kinnear leave the club. But yesterday after yet another transfer window that saw only one player arrive on loan, the former Wimbledon managers troubled spell as Director of Football came to a bitter end. His resignation comes on the back of protests from bewildered Newcastle fans that not only saw the clubs best player Yohan Cabaye leave without a replacement coming in but then had to go through the humiliation of a Tyne-Wear derby defeat. Saturdays 3-0 defeat to arch rivals Sunderland highlighted the massive gap left by Cabaye’s departure and heaped pressure on owner Mike Ashley and the clubs management. Kinnear may have been a scapegoat for the fans to lynch but his time at the club has hardly been inspiring. In fact from the moment his appointment was announced, Kinnear was grabbing the headlines but for all the wrong reasons. His boastful promises of bringing in world class players coupled with telling the world about his abilities to open any door to any manager marred his time from day one.

Then only to make matters worse, Kinnear claimed that he knew what was best for Newcastle and the squad despite mispronouncing most of the first team squad’s names. Yohan Kebab and Haten Ben Afra will live on as part of his legacy at the club, building on the one he constructed during his brief spell as manager when he famously swore several times at reporters in a now famous rant. But behind the bad jokes and the boasts lies a bigger problem for Kinnear, a man so stuck in the footballing past that he was unable to operate in the modern day version. In Kinnear’s day contract negotiations were done in the pub over a pint with an agreement reached by handshake. Its a million years away from the agent and endorsement control world that footballers today are a part of. Kinnear was simply out if his depth from the start, thinking that he could be a Director of Football as the game hadn’t moved in that much since he last managed. How wrong he was. His last spell as manager; ironically at Newcastle saw him wheeling and dealing however it was Derek Llambias operating behind the scenes who finalized the contracts dotting the I’s and crossing the t’s. When Derek left the club shortly after Kinnear’s arrival, it was the end of the road for the new Football Director but he couldn’t admit it. Instead Newcastle and its fans had to suffer through two transfer windows with little to show expect two loan deals, primarily forged due to the simplicity of the deals themselves – the only negotiation point being the wages.

To be fair to Kinnear, he should have never been given the job in the first place and for that Newcastle owner Mike Ashley must face criticism. Yes Kinnear had been Director of Football before but at lowly Luton Town and his record there hardly screamed about his ability to perform the role. After being appointed in February 2001 with the window closed, Kinnear quickly started his one man wrecking machine, demoting then-manager Lil Fuccillo and appointed himself manager of the team. It’s understandable why Alan Pardew has feared for his job continuously over the past seven months since Kinnear’s appointment. Kinnear is a manager and that is all. His record as one must be recognized with successful spells at Luton and Wimbledon but as anything else, Kinnear is out of his depth.

So what now for Newcastle? The club has not made a formal announcement following their previous one about Kinnear’s departure but Ashley is likely to appoint another Director of Football as he continues to keep that side of the business at arm’s length. Given the failure of his past two appointments to the role (Dennis Wise and Kinnear), he would be advised to seek assistance from the likes of Pardew in choosing his next candidate. After all, the new Director will have to work with Pardew directly and form a solid bond, something that Kinnear never managed to do. For the manager himself, Kinnear’s departure comes as a welcome relief as he struggled to keep control over his team and the players he wanted to bring in. Now in full control and with money to spend, Pardew will be eyeing the summer transfer window with glee. It would be safe to assume that Newcastle will spend big in the summer to strengthen their squad but as anyone attached to the club knows, that is never a sure thing when it comes to Newcastle Football Club.