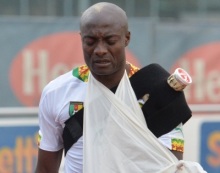 Several World Cup managers are having sleepless nights worrying if their star striker will be fit and ready to go come kick off of the World Cup. The head coaches of Spain, Uruguay, Colombia, Cameroon and Germany all have major concerns about their preferred striker being fit enough to not only start but in some cases play in the tournament. With the FIFA squad selection deadline rapidly approaching, fitness and physios across all five nations are working tirelessly to heal their broken frontmen.

The biggest concern of them all is around Uruguay’s Luis Suarez, who picked up a knee injury in Liverpool’s final game of the season against Newcastle and that later required surgery. Whilst the surgery has been deemed a success, pictures of Suarez being wheeled out of the hospital looking tired and frustrated are sending worrying signals back to Uruguay’s head coach Óscar Tabárez. Suarez is expected to recover in time but if rushed the injury could return, which would likely rule him out of the entire tournament and the start of the next Premiership season. Tabarez can fall back on the reliable trio of Diego Forlan, Edinson Cavani and Abel Hernandez but having a fully fit Suarez at his disposal would be preferred. The 27 year old had an incredible comeback season for Liverpool scoring 31 goals and winning the Player of the Year award only 12 months after his career looked to be over following a biting incident that lead to a 10 match ban. Suarez is now back home in Montevideo resting with Tabarez hoping he recovers in time for Uruguay’s second group match, a crunch game against England.

Whilst Tabarez is aiming for the group stage, Colombian head coach José Pékerman will give his star striker, Radamel Falcao until the knock out stages to recover fully from a ruptured cruciate ligament he sustained in January. The Monaco hit man is a fundamental part of Colombia’s plans and many people in that country have been praying hard for his recovery. They will have been delighted therefore to see Falcao take part in a light training session yesterday as he ramps up his recovery. Similar to Uruguay, Pekerman has a wealth of riches up front including Porto’s Jackson Martinez, Sevilla’s Carlos Bacca and Robert Lewandoski’s replacement next season at Borussia Dortmund, Adrian Ramos so will be reluctant to rush Falcao back and risk injuring him again. With one of the easiest groups in the World Cup, Pekerman may rely on his other options to help Colombia qualify and only draft in Falcao if they are in desperate need of a goal.

The same can be said for Spain’s Diego Costa who aggravated his hamstring injury again during last Saturdays’ Champions League final. The Atletico striker last only 9 minutes before limping off and now runs the risk of missing the World Cup all together as doctors have advised him that he needs at least two weeks rest. With only 18 days left until Spain kicks off its defence, Costa faces an anxious wait to see if he will be fit and indeed If Spain head coach Vicente Del Bosque selects him. The Brazilian born striker has been in great form this season, inspiring Atletico to its first La Liga title in 18 years but it could have come at a cost. Del Bosque has other options including Fernando Torres, David Villa and Alvaro Negredo but having Costa fit and for selection would offer a different tactical option, something that appeals to a master tactical tinker like Del Bosque.

Joachim Low on the other hand prefers to stick with the same formation, rarely deviating from it. But a large part of his plans revolve around the fitness of Lazio striker and German icon Miroslav Klose. The 131 time capped striker who has played in three world cups already and is looking to add a fourth, is struggling for fitness and faces a race to be ready for Germany’s opening group game against Portugal on the 16th June. With Mario Gomez ruled out due to injury, Klose is the only experienced striker in Low’s team so having him ready is a must if Germany is to have a shot at winning the tournament.

Cameroon also needs their experienced striker to recover quickly from an injury sustained in a warm up match. Pierre Webo suffered a shoulder injury scoring a spectacular bicycle kick goal against Macedonia which is now causing the Fenerbache front man some major troubles. He left the match in a sling but is hopeful that he will still make the squad if he can rest it for the next ten days. With Cameroon placed in a tough group with hosts Brazil, Croatia and Mexico, head coach Volker Finke will need a fully fit squad to get out of the group stages. Webo plays an important part of his plans alongside Samuel Eto’o so the Cameroon physio’s are working overtime to fix his shoulder in preparation for the World Cup.