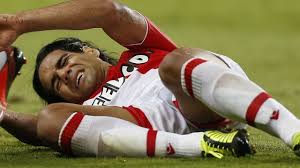 He was given as long as possible but in the end it wasn’t enough. The devastating news broke across Colombia yesterday that star striker Radamel Falcao had not recovered enough from the knee injury he suffered in January and would therefore not be selected for their World Cup squad. It’s a massive blow to the South American hopefuls’ chances of winning the tournament and to Falcao himself who will have to wait another four years for his World Cup berth. At an emotional press conference, head coach Jose Pekerman admitted that he and his team had accepted defeat in the race to have Falcao fit in time for inclusion. Coverage of Falcao in training this past week had given the Colombian fans hope that their idol would be ready in time but after consulting with medical experts, it was felt that he was too much of a risk to be in the squad.

Pekerman called the decision the saddest day in his coaching career but did praise the player for doing everything possible to be fit in time to play. With a group consisting of Greece, Ivory Coast and Japan, qualification to the knock out rounds is a realistic goal for Colombia even without Falcao in the starting lineup. Many believed that Pekerman would select Falcao anyway and give him until the knockout rounds in late June to recovery but the decision to leave him out all together suggests that even this wouldn’t give Falcao enough time. The devastated Monaco hitman told reporters that he was in good shape but he was conscious that he needed more time and didn’t want to deny a fully fit teammate a spot in the squad. He also spoke of the slight concern that taking part would only damage his recovery, a sentiment echoed by his former manager at Atletico Madrid Diego Simeone who recommended recovery first to protect his career in the long term.

It was bad news for Giuseppe Rossi who also misses out after failing to recover from a knee injury. Despite playing 71 minutes of last Saturday’s 0-0 draw with Ireland, head coach Cesare Prandelli felt that the Fiorentina striker hadn’t recovered enough and decided to leave him out of his final 23 man squad, instead picking Napoli’s Lorenzo Insigne as his fifth striker. Rossi reacted angrily suggesting that he was fully fit and able to compete but Prandelli disagreed. It’s a bitter blow for Rossi who up until his injury was the leading goal scorer in Serie A and was in contention for a place. Rossi’s exclusion is the second time that he has been overlooked for a final World Cup squad place after being left out of Marcello Lippi’s 2010 squad. Rossi’s grandfather has blasted Prandelli calling him a disgrace for leaving his grandson out after giving him false hope that he had a chance of going. The coaches’ decision is final but like Lippi, Prandelli could live to regret leaving the US born Rossi out of his team.

On player who did make the cut despite injury concerns in France’s Franck Ribery. The Bayern Munich midfielder made it into Didier Deschamps 23 man squad despite carrying a back injury that has plagued him all season. Whilst Ribery may not play at all in the tournament, Deschamps has decided to take him anyway with the chance that he may recover. Resting Ribery for France’s first group match against Honduras seems likely but it will be up to the coach and the player whether he is to feature against Switzerland on June 20th. The chances are that Ribery’s back will not have healed enough as it appears as though the problem has been in existence since as early as September of last year. Bayern boss chose to use Ribery more sporadically this season than in previous ones in order not to injure the player further but with France’s ambitions to regain their World Cup crown that they won in 1998 still strong, Ribery may be forced into action, especially if he is needed to turn a game around. The decision to leave out Samir Nasri may come back to haunt Deschamps who would rather select a partly fit Ribery over the Manchester City midfielder.