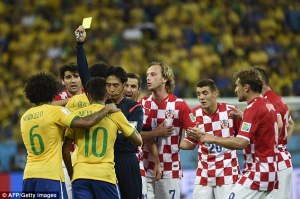 It has been four years since Frank Lampard watched in anguish as his strike against Germany was incorrectly judged as having not crossed the line. TV replays showed clearly that his strike off of the bar bounced over the line by almost a foot before coming back into play. But by that point, the referee was already running up the pitch as the game continued. The mistake sparked huge controversy and added weight to the call for goal line technology to be introduced. Fast forward four years and it has become a reality with Brazil 2014 being the first World Cup to use it. However despite a host of technological advances designed to help referees make the right decisions, basic human error mistakes are still being made.

In yesterday’s opening showcase match between Brazil and Croatia, two strange referee decisions will be talked about more today than the football that was on show. We should be talking about Brazil’s comeback from a goal down, Neymar’s superb equalizer and Oscar’s late wonder strike but instead controversy surrounding a penalty decision and the lack of a red card for an apparent elbow to the face of Luka Modric by Neymar is grabbing the headlines. Both decisions were made by the referee and his assistants and without the use of technology which would have surely given a much different result. The decision by referee Yuichi Nishimura to award a penalty for Dejan Lovren’s apparent tug on Fred inside the area was miscalculated at best and incensed Croatian manager Niko Kovac who called the decision shameful. Replays show little contact between the two players but despite this Fred crashed dramatically to the ground, earning a penalty for his team and a yellow card for Lovren. The resulting converted penalty swung the game back in the favour of Brazil and severely dented the concentration and confidence of the Croatian team.

Even more frustrating for Croatia was the decision by Nishimura to only give Neymar a yellow card late on in the game after he wildly swung his left arm and elbow into the face of Luka Modric. Why a red card was not shown immediately is up for debate – either Nishimura didn’t see the incident and hedged towards a more cautious approach or that he did see it but winced at the thought of sending of Brazil’s prize asset on home soil in front of millions of Brazilians watching on. If it’s the latter, it is understandable as doing so would be the same as escorting Pele out to the middle of the pitch and punching him in the face. But for the good of the game, and for the millions of viewers across the globe watching, Neymar should have walked. Allowing officials to review TV footage as the incident happened could have resulted in a different decision being made. If Neymar had been sent off, Croatia could have potentially rallied against the ten men of Brazil and searched for an equalizer. Instead, Neymar remained on the pitch and fed the pass to Oscar that resulted in Brazil’s third goal.

The argument against the use of technology in such incidents is that the game needs to flow and that halting every couple of minutes to review would disrupt that but this is not exactly accurate. The current goal line technology uses cameras to determine the position of the ball and if it crosses the line alerts the referee within seconds via a watch he/she is wearing that the ball has crossed the line. The human decision process on average takes four seconds so before the referee has made his own mind up, he already has a response from the goal line technology. Why similar technology could not be developed to help referees make the other decisions is baffling, especially given the high stakes now attached to many of these games.

Officiating a match is a difficult job but one that technology and innovation can help with. Take for example the use of vanishing spray that disappears within a few minutes helps the referee control encroaching by players during free kicks. Or ear pieces which allow communication between the official on the pitch and his or her assistants off it. Technology should be embraced and utilized to its fullest instead of ignored or downplayed as a threat to the game itself. FIFA is guilty of having prevented the meeting of football and technology in the past but the recent decision to allow goal line technology should help to oil the wheels on future innovations. Fans may disagree about its need but if it improves the quality and fairness of the game, then it’s only to its benefit.