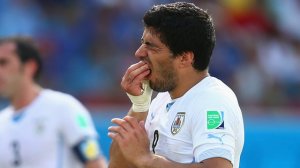 This has certainly been one of he most exciting and interesting World Cups in recent memory. Controversal moments, Jaw dropping goals and the ocassional shock result have left many praying that the tournament somehow gets extended by another two weeks! The group stage along threw up a host of surprises, none more so than Costa Rica’s surprise romp of group D. The tiny central America republic was expected to be the whipping boys of the group heading in the tournament, especially given that they were placed with three former World Champions – Uruguay, Italy and England. But being the underdogs suited Costa Rica who shocked the world with a 3-1 victory over Uruguay in their first group match. They followed up quickly with a 1-0 victory over Italy and concluded the group with a 0-0 draw with England. With seven points Costa Rica won the group and set up a knock out round tie against Greece.

Speaking of shocks, few could have foreseen Luis Suarez being banned for biting again but yet he was. This time his bite on Italy’s Giorgio Chiellini earned him a four month worldwide football ban, effectively ruling him out for the rest of the World Cup and the first three months of the new season. Stupidity once again from a talented player. Another player to fall from grace was Iker Casillas whose performances for Spain during this World Cup aided Spain’s early departure. Losing 5-1 in their opening game against Holland was bad but a further slip by Casillas against Chile led to another three points slipping through his grasp. Questions will be raised over his future and whether at 33, he will decide to retire from international football or come back to prove he still has the skills that made him a previous World Cup winner.

These are only three moments that made the group stages interesting but which one shocked you the most? Tell us now in the monthly poll below: