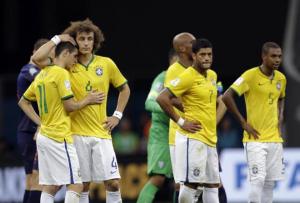 With the dust now settled on what was a stunning World Cup, the inquest into what went wrong for Brazil can now begin. Whilst other teams like England, Spain and Italy exited earlier than expected and before Brazil, it was the nature of the home teams implosion in the semi finals against eventual champions Germany and their failure to recover for the irrelevant third place playoff game that has many talking. Expectations were high going into the tournament off the back of winning the World Cup warm up event, the Confederations Cup. A spectacular demolition of Spain in the final by 3-0 lifted the hopes of a nation and set about creating a false dawn ahead of the World Cup. How could they not win? With Neymar playing well, the defence solid as a rock and Fred finishing top goal scorer, Brazil fans started to plan the victory parade before the World Cup had even began. After a group stage that taught us little except for Neymar’s brilliance, Brazil went into the knock out stages with more belief that ever before. But after crashing out in the semi finals to Germany by a score of 7-1 and then throwing away the third place playoff against Holland, many are wondering exactly what went wrong?

Over reliance on Neymar

Neymar’s brilliance was on show from day one but so was Brazil’s apparent over reliance of their boy genius. Even from the first kick of the ball against Croatia, it appeared as though the tactic was simply give the ball to Neymar. The Barcelona star was at the heart of every play that Brazil made and in the beginning it was mesmerizing to watch. But as the tournament progressed, it gradually turned into predictable. Oscar, the creator of many of Brazil’s best moves cried out for the ball but his teammates instead chose to pass the ball to the heavily marked Neymar. The once unpredictable Brazil had become routine and beating them became obvious – nullify the threat of Neymar and the game is there for the taking. Brazil had little else in the locker – no Kaka to turn to for inspiration, no Robinho to add some flair or Ronaldinho for that matter to provide some brilliance. They may have breezed through the group stage but in the knock out rounds, Brazil dangled too close to the edge for comfort. Both Chile and Colombia tried to shut down Neymar and managed fairly successfully though tight marking although the latter took that too literally. A late and high challenge by Juan Zuniga ended Neymar’s World Cup and with it Brazil’s Plan A. Unfortunately a Plan B was not in the bank for them to turn to meaning defeat against Germany was inevitable.

As a centre back, David Luiz is vulnerable. Against Germany his defending was laughable, his positioning more so. Against the Dutch his attitude to amend for previous mistakes was commendable but again his positioning let him down. Why a centre back was on the left wing with his team trailing by two goals was anyone’s guess. Too often Luiz was anywhere but at centre back leaving Thiago Silva stranded. Its easy to blame Luiz for all seven goals against Germany and that would be unfair as the entire team minus Oscar were culpable but against Holland the argument is vindicated. For the first goal, Luiz was found wandering at the half way line when the ball was played to Robben who was then dragged back by Thiago Silva for a penalty which Van Persie duly converted. Holland’s second came directly from Luiz who chose to clear the ball with his head into the middle of the pitch and onto Daley Blind’s left toe rather than head it out of towards the side line. And to cap off his bumbling display, he was again found out of position for Holland’s third stranded at left back which forced Fernandinho into defending against Janmaat’s cross. Unfortunately Scolari’s decision to place his faith in David Luiz as a centre back failed miserably and the player looked out of his depth and badly out of position. Luiz secured his dream transfer to Paris Saint-Germain for a record fee of £50 million just days before the tournament began with the view to him partnering Thiago Silva at the back next season but surely now even they must be having second thoughts?

When naming his squad, Scolari chose to name only two out and out strikers – Fred and Jo out of a possible five. The other three positions went to winger Bernard, the all-rounder Neymar and forward turn winger Hulk. Playing with one upfront and Neymar in a floating role, Brazil and Scolari put a lot of faith in one striker in particular, Fred. The 30 year old Fluminense front man was rightly picked as his starting number nine after an impressive season with his club and an even more impressive Confederations Cup which helped to silence many of his critics. But unfortunately for Brazil and Scolari, on the world’s biggest stage Fred was posted missing. Ineffective in the group stages, misfiring in the knockout rounds Fred at times looked more like a liability than a goal threat. Foolishly Scolari kept faith but to no avail as Fred finished the tournament with only a single goal to his name. Why Scolari stuck through him is up for debate but looking at the other options available to him may give the answer. Substitute Jo may be effective in the National Championship but against tough tackling defenders, he became the player who badly failed at Manchester City all those years ago. Bernard, for all his tricks on the ball, is not an out and out striker but yet was thrown into the mix against a rampant Germany with the hopes of scoring a goals or two. As for Hulk, the player who gained his name from his formidable physique and love of the green skinned monster, was more timid than ferocious during the World Cup leading to many questioning if his nickname was indeed appropriate.

Failed to learn lessons of the past

Brazil’s rich history in the World Cup is nothing to scoff at with a record five World Cups already in their locker. Learning how to win from them is one thing but learning from the mistakes of past failed Brazil teams is another. Scolari knew how to win the World Cup having won it before in 2006 but the fear of losing it never crossed his mind. He should have looked at past teams like that of the 1982 Brazil World Cup squad that went to Spain and learned from their mistakes. After all the similarities are painfully obvious. Clear favourites leading up to the tournament, they feared no one and rightly so as they were arguably one of the best Brazil sides never to win the World Cup. With a squad that included the ever talented Zico alongside the likes of Socrates, Eder, Serginho and Junior, Brazil ran through their group stage with ease which excited the Brazilian people into believing that this would be their year. But like the 2014 squad, Brazil crumbled in the knock out rounds with some startling similarities. Like Neymar, Zico was Brazils star player and the one who they looked to when they needed inspiration. He too was targeted by opposition numbers for rough treatment and almost missed the crucial tie against Italy after a horrendous challenge against Argentina threated to end his World Cup. But Zico managed to play against Italy but could do little to prevent Brazil from crashing out. Upfront Serginho, who had been in superb form for Sao Paulo in the Brazilian Championship in the run up to the tournament was misfiring and with no real option on the bench, Brazil were struggling in front of goal. Added into that Italy exposed Brazil’s defensive frailties on a too frequent basis for the game to end in their favour. Paolo Rossi ran riot with Italy eventually winning 3-2 and knocking Brazil out of the World Cup.  The harsh lessons that head coach Tele Santana learned from this experience should have been glaring warning signs for Scolari but for whatever reason he chose to ignore them.

Why he picked a squad with so few options upfront and little to no support characters like Kaka or Ronaldinho that could shoulder some of the burden from Neymar is unknown. Or why indeed he placed so much faith in David Luiz at centre back despite having a more than reliable alternative in Dante is even more baffling. Ultimately it was Scolari’s decision and one that has cost him his job with the CBF terminating his employment last week along with his coaching staff. Former Brazil manager Dunga and Corinthians manager Tite are rumoured to be the favourites to take over and regardless of which coach gets the job, both will look towards younger players like Oscar as they rebuild the Brazil squad. One man he wont be able to call upon is Fred who decided to retire from international football after being made into a proverbial scapegoat by many in the Brazilian media.  After the collapse in 1982, Brazilian football took a long time to recover focusing more on getting a result rather than playing attractive flowing football, the Brazilian way. For the sake of the world game and for the watching public, many will hope that history does not repeat itself and that Brazil can bounce back from this and show the world once more that they are a team to be feared in international football.