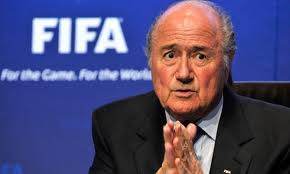 It should have been a straight race but now candidates for next year’s FIFA presidency are facing up to the possibility of it being a one horse race. Outgoing chief Sepp Blatter was due to retire and vacate his role allowing someone else to have a shot at football’s top job but a change of heart may have scupper those plans. Reports suggest that 78 year old Blatter, who will be portrayed in a new Tim Roth movie this summer about his life, will seek a fifth term in office. Having secured support from four of the six FIFA confederations (Asia, Africa, North and Central America and South America), Blatter would win by a landslide much to the disappointment of the other candidates.

The aptly named Jerome Champagne, a former FIFA executive, UEFA supremo Michel Platini, North American and Caribbean head and FIFA vice president Jeffrey Webb and Spanish football president Angel Maria Villar will all have a tough job in persuading the 209 FIFA delegates to choose them over Blatter.  Platini appeared to be the front runner for a long time but has since gone cold on the idea, instead wanting to further secure his foothold on European football with UEFA. Webb then took on the mantel, backed graciously by Blatter himself at a recent gala, but the understanding between the two gentlemen is that Webb will not oppose Blatter if he decides to run again. Instead he will bide his time until 2019, when Blatter will definitely retire (or so he says). At 49, Webb has time on his shoulders and sees the four year grace period as the perfect opportunity to forge stronger ties in the FIFA community and continue to expand on his growing reputation in the game. Villar is a popular figure within FIFA’s ranks but lost a lot of credibility in his pig headed stance against allowing Gibraltar to join UEFA. The Spanish president is yet to announce if he will run but with little chance of success he may choose to wait and see what happens with the top job at UEFA if Platini moves.

The only candidate to formerly announce that he intends to run is Jerome Champagne. The former FIFA deputy general secretary left FIFA in 2010 having spent 11 years at the organization. With a strong political background from his days as a French diplomat, Champagne spent most of his time engaged in policy and ethics discussions, which remains a huge issue for FIFA. Since leaving, he has travelled the world as a football consultant working in impoverished countries like Kosovo, Congo and Palestine trying to setup up football related programs as a form of escapism for the masses. This experience bodes well for the top job but his grasp of the fundamental make up of the game may be his downfall. After announcing his intentions to run, Champagne revealed his idea to introduce a new form of punishment to players – the orange card. Put in place to complement the yellow and red card, the orange card will act as a deterrent and when issued will sin bin players for up to five minutes. The idea comes from other sports like Hockey but is flawed in its approach and will be rejected outright by all sanctions of football as unusable. Regardless he will continue with this and his bid, unless Blatter chooses to run again, at which time Champagne will likely put his bid on ice.

Whilst the current president has faced criticism for his handling of various issues associated with FIFA and the beautiful game such as match fixing, its stance on racism and of course corruption stemming from the choices of hosts for the next two world cups, he remains in good favour with a majority of the delegates. Seen by many as the mastermind behind FIFA recent growth and financial prosperity, Blatter’s position as president is somewhat safeguarded as long as he wants it to be. Only a catastrophic scandal that direct involves Blatter could rock this steady ship but even then as history has shown, that might not be enough. He survived allegations of bribery and unsolicited payments in exchange for rewarding tournaments to regions or turning a blind eye to issues that should have called for action. It would appear as though Blatter will remain in charge for the foresable future, only to be stopped by either health issues or objections from his family including new girlfriend Linda Barras. They are said to be concerned with the demands placed on the aging Blatter and would like him to resist a fifth term in favour of retirement in order to protect his health. For the other candidates, this might be the only way to halt Blatter and his stint as FIFA president.