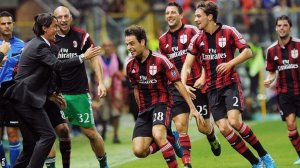 As far as excitement goes, the Serie A clash between Parma and AC Milan at the weekend had it all. Nine goals, two sending’s off, some sublime finishes and an outrageous own goal in what turned out to be one of the highlights of a goal filled Sunday in Italy’s top league. The gauntlet had been thrown down earlier on by AC Milan’s arch rivals and neighbours Inter who thoroughly thrashed Sassuolo by a score line of 7-0. Goals from Mateo Kovacic and Fredy Guarin were joined by a stunning Mauro Icardi hat trick and a brace by former Southampton man Dani Osvaldo to hand Inter a commanding win and a repeat of the score from last season in the same fixture. But the best was saved for later at the Stadio Ennio Tardini as Parma looked to put their surprise defeat to Cesena in the opening week behind them and gain all three points against AC Milan. However Roberto Donadoni’s side would once again come unstuck as a reborn AC Milan, under new head coach Flippo Inzaghi continued their good start to the domestic campaign. Since his appointment in the summer after the failed Clarence Seedorf experiment, Inzaghi has brought pride back to Milan and more importantly belief that the 18 times Serie A champions can once again regain their position as Italy’s top dog. Their opening day win over Lazio by 3-1 showed that Milan are back and should be in contention for the title as the season draws to a close. If they are to go all the way, digging in and getting a result like they did against Parma on Sunday is needed and could be the difference between a title win and a near miss.

In Inzaghi’s preferred 4-3-3 formation, Milan were on the attack from the first kick and like they did against Lazio applied the early pressure high up the field. With the front three of Keisuke Honda, Jeremy Menez and Giacomo Bonaventura attacking the Parma back four with conviction, the opening goal was always likely to come and on the 25th minute Milan got its breakthrough. Some clever play in the midfield fed Honda who control and slipped a sideways pass to fellow striker Bonaventura along the 18 yard line. Needing to slip his marker, the Italian front man showed great vision to step over the ball before doubling back to strike the ball past Antonio Mirante in the Parma goal. Parma needed a quick response and they managed to shock the visitors two minutes later by going level. After some neat interchange passing, the ball was spread out wide to Chilean midfielder Cristobal Jorquera who crossed the ball into the box right into the path of former Milan striker Antonio Cassano who coolly headed home. With Inzaghi shouting instructions, Milan stepped up a gear and raced into a 3-1 lead going into the half time break with goals from Honda and a penalty from Menez.

The second half started as the first ended with Milan in control but it was Parma who was next to score. With 6 minutes of the restart, Parma pulled a goal back through centre back Felipe who glanced round the back of De Sciglio to poke home a deflected shot by Jorquera. Once again Milan rallied and 17minutes later extended their lead through Dutchman Nigel de Jong, despite moments earlier being reduced to ten men with the sending off of centre back, Daniele Bonera. After winning the ball on the half way line with a sliding challenge, De Jong ran through on goal before carefully side footing the ball past Mirante. Parma looked dead and buried but managed once again to get back on the score sheet five minutes later with a strong header from the other centre back, Alessandro Lucarelli. Losing his marker inside the six yard box, captain Lucarelli rose above De Sciglio to head the ball into the top right hand corner past Diego Lopez. At 4-3, Parma now pushed for the equalizer but in doing so left space at the back which Milan exploited with pleasure. In a moment of madness, a badly timed challenge by defender Filipe saw him collect his second yellow of the day and reduced Parma to ten men with Milan starting to turn the screw even more.

His dismissal led to confusion in the Parma defence between Lucarelli and right back Ristovski which resulted in a bizarre fifth goal for Milan. The pair struggled to handle a long ball with Ristovski eventually playing a short back pass to Mirante which was seized upon by Jeremy Menez. The French striker simply dinked the ball past the goalkeeper and the pair watched as it ran along the 6 yard line. The chase was now on between striker and goalkeeper with Menez winning the race before sensationally back heeling the ball over the line for Milan’s fifth goal. With the game winding down, Milan looked to have tied up all three points but there was still one final twist to come. On the 89th minute, Milan’s left back Mattia De Sciglio picked up the ball just inside his own half. Under pressure from substitute Raffaele Palladino, De Sciglio doubled back before playing a pacey ball back to his goalkeeper Diego Lopez. The defender, who had already had a torrid afternoon watched in horror as the ball bounced wickedly past Lopez and slide into the back of the net to make it 5-4. Milan would hang on for the remaining minute plus injury time to gain all three points and retake their position at the top of the Serie A table. Whether they can remain there, time will tell but if they continue to show the conviction and drive to carve out a result like this one, they could once again find themselves crown Italian champions.