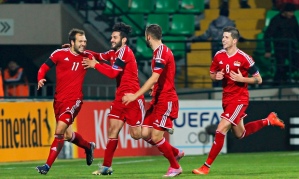 It’s been an interesting start to the 2016 European Championships qualification campaign with a series of surprising results so far. In the earlier match weeks Northern Ireland, Slovakia and Iceland showed non believers that spirit and determination sometimes can overcome experience and skill as they set about securing a handful of points in the race for qualification. Meanwhile the so called European heavyweights appeared to be sluggish out of the gate with Holland, Spain and Greece all failing to dispatch teams ranked much further down the FIFA official rankings. Whilst the Dutch and the Spanish have rebounded in spectacular fashion, Greece stuttering start to the campaign under new coach Claudio Ranieri came to an abrupt halt this past weekend when the lowly Faroe Islands arrived in Athens and left with their heads held high and three vital points in the bag. Joan Edmundsson’s 61st minute miss hit shot was enough to condemn the Greeks to bottom place in group F and to give the Greek FA enough leverage to finally dispatch Ranieri.

To be fair, the Faroes result was a shock but not as much as San Marino’s point against Estonia. The enclave microstate has not managed to secure a single point in their last 61 international games so ending that run meant more to them that winning itself. For a while it looked like the match would follow the usual storyboard with Estonia pressing from the off. But the resilient San Marino side held on to the end, securing a valuable point and ending that horrific losing run. The last game the San Marino actual won was in a friendly back in April 2004 against fellow strugglers Liechtenstein who have had their fair share of defeats as well since then. But recent results including a 0-0 draw against Montenegro in October followed by Saturday’s stunning 1-0 victory over Moldova have given Rene Pauritsch’s side much need optimism for the future. Liechtenstein now find themselves in a strange position, three points ahead of Moldova in fifth place with the former Soviet state rooted to the bottom of the table. It’s the same position that Malta now finds themselves in after their 1-1 draw with Bulgaria in Sofia this past weekend. The tiny Mediterranean island used to be the whipping boys of European football but in the past few years have started to show a more formidable side to their play, carving out friendly wins against the Faroe Islands, Liechtenstein, San Marino and Luxembourg whilst holding Northern Ireland to a draw. However in international competition the team still lacks that killer instinct showing only flashes in recent years, especially in the 1-0 win over Armenia in June of last year. Sunday’s match in Sofia started much like most of the others, with Malta going behind after only 6 minutes to a bundled in goal by Andrey Galabinov but fought back well to earn a point from the penalty spot converted by left back Clayton Failla.

When the idea of changing the qualification criteria for this upcoming European Championships was floated, it was met with a tidal wave of negative responses from critics citing that it would not make for interesting viewing nor makes it easier as UEFA President Michel Platini suggested for smaller European nations to qualify. Platini ignored the objections and pushed ahead with his master plan to rejuvenate what has becoming a stale second tier tournament behind its much more glamorous cousin, the World Cup. But after four matches which has shown that the qualification process is far from pre determined and is in fact wide open, Platini will surely now be sitting back with a large grin across his face. All nine groups are very much still in play with a variety of nations who have struggled to qualify in the past like Wales, Iceland, Scotland and Cyprus all in good positions. There is still a long journey ahead before reaching France but if qualifying continues to throw up these startling results, it may not be impossible to believe that the tournament will see not just one but several new faces taking part.