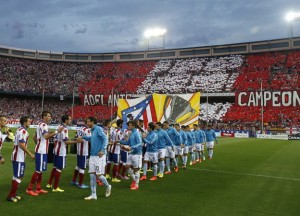 To play in La Liga is every Spanish teams dream and for Eibar Fútbol Club reaching the promise land this year was an unforgettable journey to say the least. Having toiled away in the Spanish lower leagues for over 70 years, Eibar had done the impossible and finally won promotion to La Liga after a hard fought season that saw them top the Segunda Division for the first time in 26 attempts. So far, Eibar have managed to hold their own in one of Europe’s toughest leagues. Having lost only to reigning Champions Atletico Madrid and former champions Barcelona and Deportivo de la Coruna, Eibar has shown a never say die attitude in each game amassing 10 points from their first nine games. Comfortably sitting in mid table, Eibar have been one of Spain’s surprise teams and have been picking up admirers along the way due to their tenacious play. But it almost never happened for this tiny club after bureaucracy tried to destroy their dream before it began.

A win over Deportivo Alaves and two draws including one with nearest rivals Deportivo de la Coruna at the end of the campaign was enough to secure promotion last season. Celebrations in the tiny city of Eibar, located deep in the heart of the Basque country in northern Spain went long into the night as its 27,000+ population flooded the streets to praise their team. But as the fans and players toasted a famous victory, the club’s chairman Alex Aranzabal was nowhere to be seen. Instead he was working overtime to make sure that promotion to La Liga became a reality and not a nightmare. Having started the season brightly and looking good for one of the automatic promotion places, Eibar were in planning mode for the future. That was until they learned that even if they managed to win the league, they may not be allowed to join La Liga and instead may be relegated back down to Spanish’s lowest tier. The reason was that Eibar was not a Sociedad Anonima Deportiva, which is a special type of public limited company in Spain. Introduced in 1999 to improve financial management and transparency in sports clubs, clubs are now required by law to transition into an S.A.D before competing in any of the Spanish leagues with all clubs starting to or now listed with S.A.D status. Despite being debt free and self sustaining, Eibar were ordered to comply which meant that they had to have a capital equal to 25% of the average expenses of all second tier sides (minus the two richest and poorest clubs). This meant that the club had to raise $2.15million or risk not being promoted.

Starting in March 2014, when promotion looked likely the club started its appeal process which was turned down leaving them with only one option; to raise the capital. In April, the club launched the “Defend Eibar” campaign which called on locals and the Spanish public to buy shares in the club at €50 each up to a maximum of €100k to ensure that the club remained for the people instead of in the hands of a single wealthy investor. Eventually the money started to pour in after former Eibar players, Xabi Alonso and Asier Illarramendi threw their support behind the initiative. In July 2014, one month before their inaugural campaign in La Liga was due to kick off Eibar reached its capital goal and become Sociedad Deportiva Eibar, S.A.D. The dream was alive and kicking with the players, coaching staff, fans and everyone else now connected to the club now able to celebrate once again and look forward to the challenges ahead.

For a country that’s top two teams possess close to a $1billion in debt between them, enforcing financial responsibility on the other teams seems ironic and somewhat condescending. Real Madrid and Barcelona remaining outside of the mandated S.A.D regulations for historical reasons, along with Athletic Bilbao and Club Atlético Osasuna, in a move that baffles many. Why Spain’s two richest clubs can continue to cheat the system is unknown and grates against many in Spain, especially the country’s smaller clubs like Eibar. But whilst the process to become an S.A.D was tiresome and stressful at times, Chairman Alex Aranzabal would do it all over again if given the chance. Becoming La Liga’s smallest ever team meant that Eibar are now in the history books which holds special meaning but more so playing in Spain’s top division despite bureaucracy standing it their way will mean a lot more to Sociedad Deportiva Eibar, S.A.D, better known as Eibar FC.