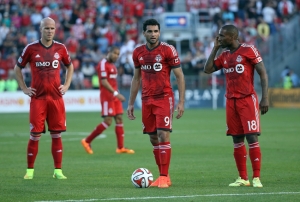 After the drama of last week which finally saw troubled the English striker leave the club, Toronto FC are gearing up for life after Jermain Defoe. Replacing the English hit man will not be an easy task despite public opinion being split about his departure. Whilst generally unhappy during his time in Toronto and looking for the exit door, Defoe still proved valuable to the team when he did play. His 12 goals in 19 appearances for the club added a much needed threat up front for a team historically that have struggled in that department. Alongside fellow new arrivals Gilberto and Michael Bradley, Defoe stood out showcasing his quality and at times making it look simple when it came to his finishing. Toronto know that they need to find a like for like replacement for the pint sized striker, someone who can not only contribute goals but can inspire his teammates to excel at the same time.

As part of the Defoe transfer, US striker Jozy Altidore moved the other way which should give Toronto a target man for next season. Altidore’s record at Sunderland was pretty appalling given the price they paid for the player. Having joined the club from Dutch side AZ Alkmaar for a reported $13 million transfer fee, the US front man only scored three times in 52 appearances and found himself consigned to the bench on a too frequent basis. In truth, the player struggled to adapt to life in the Premiership and it particular the overall pace of the game. Unlikely the Dutch league or MLS, the English Premiership is consistently considered one of the quickest leagues in the world and as a result is a culture shock to many non domestic players entering the league. Whilst Altidore possess many of the qualities needed to be a striker in England’s top division, his inability to adapt to the pace was ultimately his downfall. In stark contrast, his spell in the much slower Eredivisie was very successful with Altidore hitting the back of the net 45 times in 82 games in all competitions over two seasons.  Working alongside manager Gerjan Verbeek, Jozy found his rhythm and more importantly his confidence ending his first season with an impressive 22 goals. Unlike at Sunderland, Altidore was the benefactor of several good moves created by the Alkmaar midfield, namely through the excellent trio of Rasmus Elm, Brett Holman and Adam Maher. His form continued into the second season, scoring another 23 goals helping Alkmaar win the KNVB cup and earning himself a place on De Telegraaf’s “Team of the Season”, becoming the first American ever to do so. This prompted Sunderland to splash the cash but with a faster game and lack of supply, Altidore was set to fail before he even began.

Questions will be asked of how Altidore will cope back in the MLS and in particular with Toronto.  In a much slower league, Altidore should be able to adapt and having played in the MLS before as a rookie back in 2006, he should feel at home fairly quickly. Indeed the player who has now arrived at Toronto is much changed from the 19 year old that left for Villarreal in 2008. He is much more grounded now, more mature and at 25 is a fully established part of the US men’s national team. His experiences playing in Spain, Turkey, Holland and England will have taught him a lot about himself and now he will be asked to show that he can be a main star for one of the MLS franchises. At Toronto he will be one of the top players, alongside other designated players Gilberto and fellow US international teammate, Michael Bradley. He will be expected to lead from the front and score the goals needed to push the team forward. Altidore will look to the players behind him to create the chances which may be an issue with only really Bradley and Jackson able to create something from nothing.

However the imminent arrival of Italian international Sebastian Giovinco from Juventus could add the creative spark that the Toronto desperately needs. The 28 year old playmaker that can operate as an attacking midfielder, winger or striker is expected to be unveiled this week and will take on one of the designated player roles at the club which will likely mean that Gilberto either departs the club or is forced to take a pay cut to stay. Either way, Toronto will land a talented player who has pace and skill in abundance and will revolutionize the way that Toronto plays. Giovinco alongside Bradley will create the chances for Altidore to take which should help Toronto to climb the table and challenge next season. Head coach Greg Vanney will be hoping that Altidore can pick up where he left off at Alkmaar and forget about his torrid spell in England with Sunderland. If Altidore can resume his goal scoring prowess then the ghost of Defoe will finally be laid to rest with Toronto starting yet another chapter in their short but colourful history.