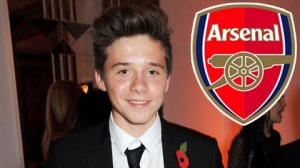 It should come as no surprise that the offspring of David Beckham have decided to pursue football careers with his oldest son Brooklyn becoming the first to gain a contract. The 15 year old winger has signed a short term deal with Arsenal with a view to impressing enough to have it converted into a full time professional contract when he turns 17. Brooklyn’s decision to join Arsenal over rivals Chelsea and Beckham’s old club Manchester United may have come as a surprise to a few however the north London club have been actively involved in nurturing all of Beckham’s kids during the early stages of their careers with his younger sons, Romeo and Cruz also at the club in their youth ranks. Arsenal have been unable to comment about Brooklyn’s signing due to his age but sources close to the club are optimistic about his future and have already hinted at similarities in style between Brooklyn and his father, David.

Brooklyn is hardly the first son of a famous footballer to follow his father into the game. The history books are littered with examples of prodigal sons trying to make their mark however in a vast majority of cases it doesn’t make for great reading with few managing to emulate what their parent achieved. Take for example Jordi Cruyff, the son of legendary Dutch midfielder Yohan who failed to live up to the hype created by his maestro father’s career. Stints at Barcelona and Manchester United did little to help Cruyff’s career with too high expectations placed on him higher solely due to his name. He was expected to be as good as his father but in truth the pressure of reaching the same level as Yohan was far too great for the talented Jordi to ever suceed. It was a similar story for Paul Dalglish who after struggling to make the grade in the Premiership eventually becoming somewhat of a journeyman with stints in Scotland, Northern Ireland and the US before ending his career in 2008. Being the son of Liverpool and Scotland legend Kenny was never easy for Paul who was touted for great things even before he had kicked a ball in earnest. Similarly the sons of Danish legends Michael and Brian Laudrup have yet to achieve the dizzy heights that their fathers respectively reached. Michael’s sons Andreas and Mads and their cousin Nicolai are all professional footballers in their own right but failed to make the grade and are now cutting their trades in the Danish league without making too many ripples.

That said, there are a few examples of son’s becoming greater than their fathers. Paolo Maldini is one such example of a success story. His father Cesare was a good player in his day but never really caught the imagination like his son did. Over a career spanning nearly 25 years, Paolo became one of the best defenders in the world and is now classified as an icon at his one and only club, AC Milan so much so that when he announced his retirement in 2009; Milan decided to retire his number 3 jersey in honour of all of Paolo’s achievements. Similarly few England fans these days remember Frank Lampard Snr contribution to the beautiful game but his son Frank Jnr is remembered and is viewed as one of the best midfielders England has ever produced. A born winner, Frank has had a glittering career that continues to this day and with over 106 appearances for his country is the sixth most capped player for England in history.

Predicting how Brooklyn will fare in his career is almost impossible but England fans will be hoping that he can repeat what his father did and become an England legend in his own right. His journey will be long, full of twists and turns along the way but it won’t be one that he will make alone. Brooklyn is part of the next generation of footballing sons who are about to break through. The kids of Paolo Maldini (Christian and Daniel), Zinedine Zidane (Enzo, Luca and Theo), Edwin Van Der Sar (Joe), Didier Drogba (Isaac) and even Brazilian great Pele (Joshua) have now reached that age where speculation over what they can do has now started. The pressure piled upon these youngsters will be great with some failing to make the grade. However with their parents supporting them all the way, encouraging their development and coaching them on how to handle such pressure these kids will have a better chance than many to succeed much like their fathers did before them.