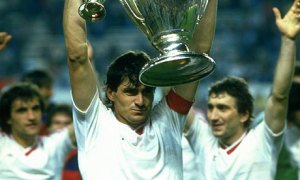 May 7th 1986 is a date engrained into the memories of one particular set of fans. On a warm May evening in Seville, Romanian side Steaua Bucharest etched their names into the history books by becoming Eastern Europe’s first ever European champions. In a thrilling final against the mighty Barcelona managed by Englishman Terry Venables, Steaua upset the odds to lift the European Cup high into the air and earn their way into football folklore.  Even now 30 years on, only Serbian side Red Star Belgrade in 1991 has been able to take the title back to Eastern Europe and give that region something to cheer about. It was a fantastic achievement for Steaua, one that would be hard to replicate now given the changes to the tournament and the growing financial disparity between the top five European leagues and the rest but one none the less that will not be forgotten.

Before the tournament changed to its current iteration – The Champions League, the European Cup was much more open with 32 teams competing over five rounds to see who would be crowned kings of Europe. It was a sombre start to the 1985-1986 tournament after the tragic scenes at the 1985 final in Brussels where 39 people were killed and 600 were injured after fans of Liverpool and Juventus clashed in the stands. As a result no English clubs were allowed to take part in the 1986 tournament as way of punishment but Juventus, as holders would take part as they were deemed to be the victim in this incident with most of the dead being from their fan base.  Along with Juventus, there were other European greats like Bayern Munich, Ajax, Anderlecht and of course Barcelona but the 32 also had some smaller teams who have since fallen by the wayside. Teams like Dynamo Berlin, Budapest Honved, Finnish side FC Kuusysi and Gothenburg have all struggled in their respective leagues with most falling to get back into Europe for some time now.

Steaua’s run to the final began with a first round ties against Danish champions Vejle Boldklub. After being held in Denmark in the first leg by a score of 1-1, Steaua welcomed Vejle to Bucharest two weeks later and showed them little mercy eventually thrashing Vejle 4-1 and 5-2 on aggregate. Up next was a formidable opponent in Hungarian side Budapest Honved. The Hungarian champions were going through a second golden age that saw them secure seven titles in thirteen glory filled years during the 80’s and early 90’s, featuring stars like Lajos Detari and Kalman Kovacs. Indeed it would be Detari who would scare Steaua in the first leg, snatching a 1-0 win in Budapest to set up a nerve jangling second leg back in Romania. But Steaua who had some star players of their own, namely Marius Lacatus, Victor Piturca and Helmut Duckadam would turn on the style once more at home and would surge into a four goal lead before Detari could find the net with what in the end turned out to be a mere consolation goal.  Into the quarter finals marched Steaua and at last some luck as they avoided more troublesome sides like Aberdeen, Juventus and Bayern by pulling FC Kuusysi out of the hat. However it wouldn’t be as easy as expected with Steaua only just managing to claw its way into the semi finals thanks to a solitary goal by Piturca in the second leg.  That strike was enough to set up a semi final against Belgian side Anderlecht and hand Steaua the realization that they were only 180 minutes away from their first European final.

Much like their run to the semis, Steaua started slowly losing the first leg 1-0 thanks to a goal from the legendary Enzo Scifo. With everything to play for Steaua appeared to step up a gear once again at home and thrashed their opponents by 3-0 in a stunning comeback. Steaua were Seville bound with only Barcelona now standing between them and glory. The final itself was a stunning affair with 70,000 fans packed into the Estadio Ramón Sánchez Pizjuán. Barcelona as strong favourites blew out of the blocks early but were unable to find a way past the sensational Duckadam in goal. The Romanian made multiple saves to keep his side in the match as the game stretched past the regular ninety minutes and deep into extra time. Despite chances for both teams, neither could find the breakthroughs which eventually lead to one of the most extraordinary penalty shoot out of all time.

Steaua would take the first penalty with midfielder Mihail Majearu to take it but he could not beat Urruti in the Barcelona goal from twelve yards. Barca captain Jose Ramon Alexanko stepped up next but he too found difficulty in scoring with Duckadam saving well to his right. The next two penalties by Steaua’s Laszlo Boloni and Barcelona’s Angel Pedraza would be saved by the respective goalkeepers meaning that the pressure was then on Lacatus to give Steaua the advantage. He did so with a thumping penalty high into the net that Urruti had no chance in stopping. When Duckadam saved Barcelona’s fourth penalty, Steaua knew that is Gavril Balint could convert his, they would be champions. He did so in emphatic fashion, sparking delirious scenes amongst the Steaua players and their travelling fans. Steaua Bucharest had made history, becoming Eastern Europe’s first team to lift the European Cup. That team is still remembered to this day as many wonder how long it will be before we see such an upset like this again on Europe’s biggest club stage.