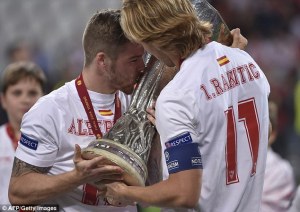 Once considered the poorer little brother to the Champions League, the Europa League appears to be on a quest to show just how good a tournament it can be. With the stakes raised this season (with the winner given an automatic slot in the Champions League), teams appear to be taking the tournament more seriously than ever before with several top sides still in contention. It has been a thrilling tournament to date with a plethora of goals to keep the fans entertaining. After a goal filled group stage (379 goals over 144 games, an average of 2.6 goals per game), the knockout stage had much to live up to and did not disappoint. Russian sides Dinamo Moscow, Zenit St Petersburg and Dnipro join Ajax, Dynamo Kiev, Sevilla and Villarreal in the last 16 after a series of strong performances and once again a barrage of goals. From the 32 matches played, a total of 88 goals were scored or an average of 2.75 goals per game which bodes well for the tournament as it enters the last 16 stage.

British participation however will be limited to only Everton after Liverpool, Tottenham and Celtic all crashed out last night.  Everton will now play Dynamo Kiev after dispatching Young Boys 7-2 on aggregate. It’s not an ideal draw for Roberto Martinez’s team with the first leg due to be played in Kiev in mid march.  Across the city, Steven Gerrard’s dream of leaving Liverpool after lifting the Europa League Cup were dashed after a 1-0 score line after ninety minutes in Turkey against Besiktas sent the game to penalties with defender Dejan Lovren missing the decisive one. Manager Brendan Rodgers defended his team saying that they had played well throughout but in truth Liverpool lacked the cutting edge to make it past an ineffective Besitkas side.  Also poor in front of goal was Tottenham who rested the inform Harry Kane for Sunday’s League Cup Final against Chelsea and replaced him with Roberto Soldado. To say that Soldado has been a flop since his arrival from Valencia two seasons ago is an understatement and after another confidence sapped performance from the once prominent striker, you have to wonder how long he has left at White Hart Lane. Two goals from Mario Gomez and Mohamed Salah were enough for Fiorentina to secure a 3-1 aggregate win over their Premiership competitors.

Fiorentina are joined in the last 16 by four other Italian sides – Rafa Benetiz’s Napoli, Roma, Torino and Celtic slayers Inter Milan. Inter’s nervy 1-0 win at the San Siro proved to be enough after a hard fought game that swung in the Italian side’s favour after the dismissal of Celtic’s influential centre back Virgil van Dijk. Making up the three places are Club Brugge, Besiktas and Wolfsburg, who secured passage through by knocking out Aalborg, Liverpool and Sporting Lisbon respectively. The draw, made earlier today, has thrown up some interesting matches with an all Spanish clash as Villarreal take on Seville and an all Italian clash with Fiorentina taking on Roma. Elsewhere Inter travel to Germany to face Wolfsburg whilst Brugge entertain Besiktas and Ajax make the long trek to Dnipro. Zenit vs. Torino, Napoli vs. Dinamo Moscow and Everton’s trip to Kiev completed the draw with the first leg to be played on March 12th and returns seven days later.

Given that the tournaments highest goal scorers Villarreal (20 so far in the group and knockout stages), Everton (17). Napoli, Wolfsburg, Brugge and Kiev (all 16) are still in contention again bodes well for the fans who are likely to see even more goals. Predicting a winner at this stage is almost impossible with all 16 remaining sides in with a chance. Current holder Sevilla will be hoping to become the most successful team in the competition by winning their fourth title. If they can secure back to back title, they will also become the first team to do so since the tournament was renamed from the UEFA cup to the Europa League. They will face stiff competition with five other former winners still left in the competition.  With the final set to be played in Warsaw on May 27th, the race for Poland is now on and what a race it is set to be.