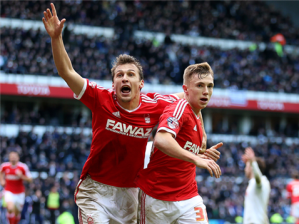 One of the most successful clubs in English football history having won back to back European Cups during the dizzy heydays of the Brian Clough reign, Nottingham Forest are desperately looking to rekindle those years under new boss Dougie Freedman. The Scot, who replaced club legend Stuart Pearce in February after a disastrous return to the City Ground for the former England Under 21’s manager have now put together an impressive run that has them leaping up the table towards the promotion places. After a sixteen year absence, we ask do Nottingham Forest have what it takes this year to make that final step back into the Premiership? In our new series of club profiles, we break down the Forest into its elements and make suggestions about what is needed for them to make that step and start back on that path towards glory.

He may not be the most expensive player bought by Forest (Assombalonga for GDP5m) or the highest profile player (Lansbury – at Arsenal from the age of 8, Wenger commented that he “will be a big player” and capped by England at U16/U17/U19/U21 levels) or most creative (Antonio has scored 11 goals and has 11 assists this season), but Jamaal Lascelles is definitely a star. A product of the Forest youth system, Lascelles is a strong, commanding centre back that is quick and comfortable on the ball. In August 2014, Newcastle United bought him from Forest, and then loaned him back for the season. He has represented England at U18/U19/U20 levels and is now featuring for the U21 team.

Historically the formation most used by Championship teams in 4-4-2 (this is especially true for the teams promoted over the last 5 years).

However, with Forest’s squad I would make a slight change to their 4-1-4-1 and make it a 4-2-3-1 with a flat back 4 and the 2 central midfielders split as 1 deep lying player and the other a box-to-box player. The 3 attacking midfielders would have a central playmaker and the 2 wide men as inside forwards (keeping the opposing full backs from moving forward).

Another advantage of this formation is that it can morph into multiple other formations quickly and without a change in players:

To accommodate this formation then a few personnel would need to change.

Post by Kenny C, BOTN writer based in Asia