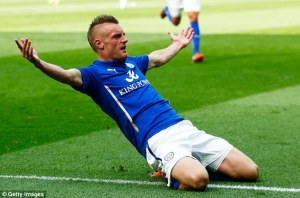 Not since the shock 5-3 victory over Manchester United back in September has Jamie Vardy had such an impact. The Leicester City winger, who bagged a goal on that day in a pulsating game, had been notoriously quiet since then but popped up on Saturday against West Brom to remind everyone how good he can be. Picking up the ball at the half way line Vardy surged forward with the ball apparently stuck to his foot. Going past two players and into the box, the Leicester fans rose to their feet as Vardy unleashed his shot past Myhill in the West Brom goal. The importance of Vardy’s last minute strike is as yet unknown but it did hand his team the crucial three points it needed in their fight against relegation. Rooted to the bottom of the league, Leicester looked dead and buried going into the match but after a gritty performance and thanks to Vardy’s last minute heroics, Leicester’s survival push could be on. Now only three points behind safety with a game in hand, Leicester’s run in is favourable with winnable matches against Burnley, Sunderland and QPR but they will need players like Vardy to perform in every match if they are to avoid the drop.

The gap at the bottom is tight with only 10 points separating 7 places.  Any three of West Brom, Aston Villa, Sunderland, Hull, QPR, Burnley and Leicester could go down with even 13th place Newcastle still not mathematically safe. Defeats for Burnley, QPR, Hull and Sunderland this weekend have added to the tension with only Aston Villa managing to pick up points away to Spurs. Dick Advocaat’s Sunderland revival looked to be on after impressive derbies win over Newcastle last weekend, with Jermain Defoe adding the gloss on that occasion. But his new side was firmly brought back to down to earth with a bump by a rampant Crystal Palace side who continue to improve under Alan Pardew. A hat trick by Yannick Bolasie and a header by Glenn Murray sealed a 4-1 win and put pressure on Dutch coach Advocaat. With one of the worst run in of all the teams involved in the relegation dog fight, it doesn’t look good for Sunderland. They face Stoke next week before games against Southampton, Everton, Leicester, Arsenal and Chelsea in a series of must win fixtures.

At the other end of the table, Chelsea showed why they are likely to end this season as champions. A nerve jangling performance against QPR was not quite what Jose Mourinho had in mind so the relief on his face was hard to ignore when Cesc Fabregas popped up to score the winner. The Spanish midfielder, sporting a face mask to cover the broken nose he suffered last week in a clash with Charlie Adam, broke QPR hearts with a 88th minute shot that squirmed under Rob Green. Chelsea are now 7 points clear with seven games left, one more than the chasing pack. Arsenal continued their pursuit of their London rivals with a 1-0 win over Burnley thanks to an early strike by Welsh midfielder Aaron Ramsey. Manchester United also kept up their chase with a convincing 4-2 demolition of neighbours Manchester City, a result which heaps more pressure on manager Manuel Pellegrini. The Chilean has been under fire after City crashed out of the Champions League and lost valuable ground in the race for the Premiership title. He will more than likely be asked to leave his position with the only question being when as some speculate that he may not get to finish the campaign as manager.

City will be desperate to hold on to 4th place to secure Champions League football once again but the face stiff competition from this year’s surprise outfit Southampton, Liverpool and Tottenham. Ronald Koeman’s Southampton were suspected to struggle this year after selling off half their squad by some clever signings and the addition of new energy into St Mary’s has seen Southampton defy their critics and mount a serious push for Europe. They continued their push with a 2-0 win over struggling Hull and will be bolstered by the news that 6th place Tottenham lost to Aston Villa. However Liverpool could leapfrog them tonight if they beat John Carver’s inept Newcastle side.