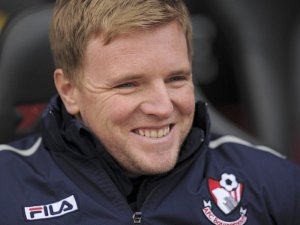 In February 2013, the BBC compiled a list of all the managers within the various English Divisions and ranked them according to performance. The study took into consideration a variety of factors including the number of points returned per game from each full time manager that season. Unsurprisingly Sir Alex Ferguson was top of the list due to his high flying Manchester United team. But the name in second place surprised many. Bournemouth’s Eddie Howe, at 35 years old was one of the countries youngest managers but had found success in management fairly easy to come by. A gifted player whose career was cruelly cut short at the age of 29 due to a knee injury, Howe’s passion for the game drove him into coaching and eventually management only two years later with the club where he had spent most of his playing days – Bournemouth. In doing so he became the youngest boss in the Football League but his appointment was met with skepticism with few believing that he had what it takes to be successful. Howe however had no doubts in his ability and set out to show his doubters how wrong they could be. Now having steered his beloved club from the brink of administration in the Football League Two to the promise lands of the Premiership, his doubters are scoffing humble pie and proclaiming Howe as a legend.

Howe’s success is unbelievable given the condition the club was in when he was appointed manager. Players of the fictitious manager simulation game Football Manager would struggle to match his success without deploying the save and reload approach when games and results haven’t gone their way. But Howe had no such quick fix approach and instead had to grind out victories in the early days of his tenure to ensure football league survival. The story could have been so different if club legend Steve Fletcher hadn’t scored his winning goal ten minutes from the end in the vital clash with fellow strugglers Grimsby in the second last match of the 2008-2009 season. That goal completed Bournemouth’s dramatic turnaround under Howe who managed to overhaul a 17 point deficit to keep them in the Football League. The momentum from that run continued into the next season with Bournemouth earning promotion to the Football League One against the odds despite having a squad of only 19 players all year.  By now Howe was on the radar of several clubs who acknowledged his talents for working under extreme conditions and still getting results. He would stay as boss of the Cherries until January 2011 at which time he was eventually tempted to jump ship and try his hand at the then Championship club Burnley. Despite posting good results during his time in charge, Howe never felt at home at the Lancashire club so he decided to quit and return to Bournemouth in October 2012 citing “personal reasons”. The move would be viewed as a failure by some in the media; that Howe couldn’t hack it in the Championship and perhaps his abilities as a manager were limited to the lower leagues. But Howe quickly set out in proving them wrong once again by steering Bournemouth into the Championship that very same year. Bournemouth seemed at ease in the Championship finishing 10th in their first season, only six points off of the play off places so when they exploded out of the blocks this year many wondered whether a fairytale was in the works.

Bournemouth’s promotion to the Premiership is all but secured with only one game remaining and a goal difference of 19 between the Cherries and Middlesbourgh in third. Only a total collapse against Charlton on the final day and an emphatic win by Aitor Karanka’s team against Brighton would see Bournemouth slip to third and Middlesbourgh automatically promoted. Howe is not likely to let that happen and will look to put the cherry on top of the cake with a win in their final game.  A favourite for Championship Manager of the Year this season, Howe has already picked up the title of Football Manager of the Decade for his stunning performances as boss of Bournemouth over the past seven years. Howe’s reputation is soaring with Gary Lineker proclaiming on Twitter that Howe could be England’s Special one, a reference derived from Chelsea boss Jose Mourinho who is the original self proclaimed Special one.  Based on Howe’s managerial career so far, it’s hard to argue with Lineker. The similarities between Howe and Mourinho are startling. Both started in management at a young age and found success with their home town clubs. Like Mourinho, Howe optimizes a new type of manager who has shed off the old school approach of coaching and has embraced the philosophy of player development and the use of modern technologies to give his team the edge in games. Like other modern day coaches such as Pep Guardiola, Luis Enrique and to a lesser extent Brendan Rodgers, Howe is a meticulous planner who analyzes every aspect of the game from training ground routines and practices to formation strategies and player development. Howe has studied the game with a deeper level of awareness than most managers do and has reaped the benefits. Next season he will lead his team out for its debut game in the Premiership but already the doubters are surfacing once again by suggesting that Bournemouth will go straight back down. Howe, like always is out to prove them wrong.