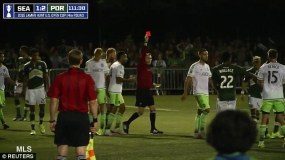 Speak to anyone who knows Clint Dempsey and they will tell you that the US forward is a quiet player who keeps his emotions in check both on and off the field. Which is why his actions during Tuesday night’s US open cup match are so strange. The former Tottenham and Fulham front man who is now playing for Seattle Sounders  reacted badly to teammate Michael Aziri receiving a red card against Portland Timbers by grabbing the referees note-book and ripping it up. The incident happened deep into extra time during in a heated and tempestuous match with Seattle trailing by 2-1, referee Daniel Radford produced a straight red for Arizi following what appeared to be merely a coming together of two players. Seattle at this point were already down to nine men after midfielder Brad Evans was sent off by Radford earlier in the match and having lost striker Obefemi Martins to injury after Seattle had used all its three substitutes.  Enraged at seeing his clubs chances of a potential comeback taking a further hit, Dempsey raced to the referee to protest the dismissal.  What followed was a heated exchange between the two before Dempsey turned and walked away in disgust.

However moments later he returned to the referee, grabbed his notebook and threw it to the ground before going over to pick it up and rip it in half. Left with little choice, Radford produced first a yellow card to Dempsey and then a red card as the player had already been cautioned earlier in the match. This enraged Dempsey further who tried to square up to the referee only to be dragged away by his teammates before the situation got further out of hand. Dempsey’s sending off, along with Arizi’s meant that Seattle would finish with only seven men on the pitch. Portland took advantage of this by sealing the victory with a third goal four minutes from time thanks to a strike from Maximiliano Urruti. The defeat sees the defending US Cup champions Seattle crash out of the tournament with the ramifications of Tuesday nights apparent lack of discipline still to be felt. Whilst Evans and Arizi will likely face one or two match bans, the punishment for Dempsey could be a lot more with US Soccer ready to make an example of the 32-year-old. Due to different interpretations of the rule book, Dempsey’s actions could either be considered a gross misconduct or worse assault on a referee which carries a three-month ban from all soccer related activities. Section 531-9 of the US Soccer policy manual states the following:

The referees note-book could be considered part of his uniform or even his personal property so if US soccer follows the rule of the law, then Dempsey could be in a lot of trouble. However handing Dempsey a ban of this length could ultimately hurt US Soccer as the ban would apply to all soccer including the US men’s international team. With the Gold Cup fast approaching, the loss of their influential captain could be devastating for their chances of success which is much needed as they gear up for qualification to the Confederation Cup in 2017 and the World Cup in 2018. Doubters only have to look at last years World Cup for proof of Dempsey’s importance to the US team as he single handedly pulled them into the round of 16 with several stunning performances in the group stage. If they were to ban him, Dempsey could react badly and end his international career all together which would hurt the US further. But taking no action may have a similar effect and would make a mockery of the rules themselves which are set in such to govern football in the US.

Questions will be doubly asked about the referees performance during the match with several ex players saying that the way he called the game was highly unprofessional. But regardless of how bad the referee performed in this match, it is no excuse for the child like antics of Dempsey. The mild-mannered yet passionate forward simply lost his head and will likely need to face up to that in the coming weeks and months ahead. He will need to issue an apology, beg for leniency and hope that US Soccer decides not to make an example of the country’s captain.