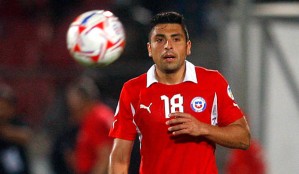 The antics of Chilean defender Gonzalo Jara during Wednesday’s crunch quarter-final Copa America clash with Uruguay were despicable. The centre back played a hand literally in the sending off of PSG striker Edison Cavani in the 63rd minute of the match that ultimately swung the balance of the game in favour of Chile. Cavani received a second yellow after appearing to lash out at the defender, striking him in the face. However on closer inspection from a different angle, the reason for Cavani’s actions can be better understood. In footage capture from behind the two players, Jara is seen approaching Cavani at the half way line and sticking his finger into Cavani’s backside. The striker, who was doubtful for the match after his father was arrested for killing a man in a car accident, reacted as most would by pushing Jara away. The act itself was not worthy of a card but the referee was fooled by Jara who fell to the ground in theatrical fashion.

With Uruguay reduced to ten men, Chile went on to win the game thanks to an 81st minute strike from right back Mauricio Isla and progress to face Peru in the semi finals on Monday. Uruguay, quite rightly so were incensed by the actions of Jara and protested saying that he had deliberately done it to get Cavani sent off. Those protests may have fallen on deaf ears with the Copa organisers Conmebal but they have been heard loud and clear by Jara’s club, German Bundesliga side Mainz 05. The side’s Sporting Director Christian Heidel has revealed that the club is appalled by Jara’s actions and is ready to take their own actions by selling the player this summer. Heidel told German newspaper Bild that Jara knows he will be sold if the club receives a reasonable offer. He went on to state that the club will not tolerate that sort of behaviour from a player who represents their club. His disgust is less about Jara’s wandering hand but more so about the theatrical spill he took in order to ensure Cavani was dismissed.

Jara has as yet failed to make a statement in response but it’s believed that relations between Mainz and himself have rapidly deteriorated. It is however not the first time that this has happened with the Chilean defender well-known for his lack of discipline and hot streak. His career, which has taken him from his native Chile to Germany via a five-year stay in England with West Brom, Brighton and Nottingham Forest, is littered with disciplinary action so it’s hardly surprising that his current club is having similar issues. That said, it is unusual for a club to react in such a manner based on an incident at international level. When Luis Suaraz famously bit Giorgio Chiellini at the World Cup last summer, his then club Liverpool decided to once again to support their player despite several fan protests. It was only after they received a substantial offer from Barcelona that they decided to sell their prize striker but if this had not materialized he would still be at the club today. Mainz decision to sell Jara based on his actions for Chile is a radical step but one that can be rationalized if you consider players as an extension of the clubs brand. Mainz at its heart is a family club, who actively promote games to the next generation of fans with attractive family ticket packages. Having a player like Jara associated to the club could potentially send out the wrong message and damage their brand in the long run. Ridding themselves of the player now appears to be a sensible approach, with any fee a bonus given that he was signed last summer as free agent.

Jara and his agent will have a busy next few weeks as they start to look for yet another club for the troubled Chilean. There is an argument that the pressure placed on the Chile squad to reach the final is immense which could have resulted in Jara taking such drastic actions to gain the competitive edge in a match which they were in danger of losing. Winning the Copa at home for the very first time would mean a lot to the Chile players including Jara who have developed as a team over the past five years. For the next couple of games, Jara will give his all for Chile in the hopes of lifting the trophy and perhaps also putting himself in the shop window for a potential new club.That is as long as he keeps himself out of mischief which is still to be seen.