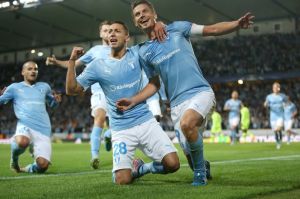 It’s hard to say it but Barry Glendenning called it. The sour puss Guardian Football Weekly contributor correct called it on last weeks podcast that Celtic would crash out of the Champions League qualifiers to Malmö. The Irish journalist who adds his views on Scottish football to the pod via the superbly named “fitba corner” segment stated that after watching Celtic throw away a two goal lead in the first leg that they were destined for the Europa League with Malmö progressing to the Champions League group stages at Celtic’s expense. Many doubted it but he was right as Malmö stormed back in the return leg and knocked Celtic out with a 2-0 win.

In fairness, Glendenning is anything but a clairvoyant, instead the seasoned journalist can expertly read a game and highlight the issues. However in Celtics case the issues were apparent to everyone who cared to look, even the clubs management team. Over the past few weeks, Celtic have played the same way in every game – bursting out of the blocks with enthusiasm and slick passing eventually surging into a lead. But as the game progresses Celtic appear to drop down a gear, letting their opponents claw themselves back into the game before a nervous finish to the match for Celtic. It appears as though they run out of steam having expended too much in the opening forty-five. Against the poorer teams in Scotland (apologies to Aberdeen manager Derek Mcinnes who may take offence to that remark once more) they can get away with it but in Europe, Celtic are caught out. Beating Malmö should have been pretty cut and dry but instead Celtic laboured in the first leg after starting as always so brightly. Letting a two goal lead slide as badly as they did at home is outrageous to say the least, especially given the ease in which Celtic had controlled the opening period. Three goals down, the Malmö players heads had already dropped until Celtic flung an arm around them and invited them back into the game. The Malmö fire was burning bright once more as they surged up the park in search of redemption and a second goal.

In the first leg, poor substitutions from the inexperienced Celtic boss Ronny Deila added fuel to the fire with Ciftci replacing the highly effective Griffiths with over 15 minutes remaining and Celtic leading 3-1. Ciftci’s addition was meant to freshen things up for Celtic but instead effectively reduced them to ten men as the former Dundee United player showed his inability to play at this level by running around the park like a headless chicken. Deila must have been hoping for the striker to come on and finish the game but instead his substitution may haunt him for some time. That is if he isn’t haunted by his decision to let Jo Inge Berget leave the club last summer after he conveniently popped up for Malmö to score twice and hand them a life line. Despite losing the game 3-2, the former Celtic flop gain redemption back at Celtic Park with a brace that swung the tie back in favour of the Swedish champions. Deila’s face said it all as Bergets shot hit the net for the second time on the 90 minute mark. His dream of Champions League football were vanishing once more much like they did last season in similar fashion.

Celtic needed to score in Sweden to restore the buffer but instead it was Malmö who drew first blood, netting mid way through the first half through captain Markus Rosenberg. If the score line remained the same, Malmö not Celtic would progress to the lucrative group stages of the Champions League on away goals. Celtic needed to score and fast to give themselves a chance. But Malmö were lying in wait for them, ready to exploit the space between the midfield and defence as Celtic pushed players forward. The second goal may have come slightly against the run of play but it had been coming. Derek Boyata’s bumbled clearance finally beat the impressive Craig Gordon in the Celtic goal to add further misery to Deila’s night who now must answer questions about how his side failed to perform yet again. Excuses can be made about poor refereeing and bad decisions but ultimately the only people who Celtic should blame are themselves. They should have tied the game up at Celtic Park last week with the return leg a given. Instead they fall to the Europa League once more, losing an estimated £12million on route.

Ironically they look set to make up that loss with the sale of centre back Virgil Van Dijk to Southampton for the same fee following their defeat to Malmö. But the sale of the Dutch defender is hardly going to please the fans who were hoping to retain him as they planned for champions league outings across Europe with Virgil at the heart of their defence. That won’t happen now with Celtic likely having to trim their squad after another failed European adventure. Malmö progress to Thursday’s draw whilst Celtic will have to wait until Friday to find out who they will play in the group stages of the Europa league.