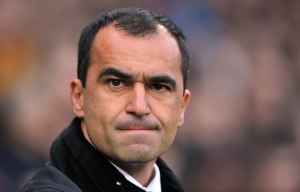 The life of a Premier League manager is anything but an easy one, just ask Roberto Martinez. With fan protests over the running of the club, a nervous start to the new season and his star defender submitting a transfer request, the Everton manager has had better weeks. It began on Sunday with a 2-0 defeat to Manchester City thanks to two second half goals from Kolarov and Nasri. Everton had competed well throughout but had failed to repeat the previous weeks goal scoring exploits with Martinez bemoaning that the lack of luck in the six yard box had been their downfall. An bad injury to the promising Brendan Galloway added further to his frustration. On Monday, Martinez focus was to get his team back on track in preparation for the Capital One Cup second round clash with Barnsley on Wednesday but transfer rumours about the potential signing of Ukrainian Andriy Yarmolenko and Brazilian Bernard proved to be an annoying distraction.

The following day a bombshell was dropped on Martinez as John Stones handed in a transfer request in order to force a move to Chelsea before the window shuts. The England international has been the subject of four bids around the £30m mark by the current Premier League champions, all of which have been rejected by Everton. Martinez refused to accept Stones request and insisted that the player is not for sale but with Chelsea aggressively pursuing the player and with Stones now keen to go, its more likely that Everton are simply holding out for more cash before letting the player move. Martinez does not want to lose the centre back but will be well advised that the club’s coffers could do with bolstering and that cashing in on a player who cost only £3m back in 2013 for a fee ten times that is good business. If Stones is to go, Martinez would rather it be sooner rather than later so that he can find a replacement with the window due to shut next Tuesday. Everton have already drafted in Argentine Ramiro Funes Mori from River Plate but it will be seen whether he can cope with life in England’s top division. BBC journalist and resident South American expert Tim Vickery doesn’t rate the player and voiced his concerns on a recent BBC World Football Phone in which he hosts along with Dotun Adebayo. He believes that Mori will be a flop, lacking in the necessary skills and toughness to be a success in the fast paced Premier League. Not that Martinez cares though as he looks to strengthen his side for a life without Stones at the heart of their defence.

Stones may have played his final game last night ironically against his former club Barnsley as Everton travelled to the Oakwell stadium for the second round of the cup. With Stones playing in the centre of defence, Everton were slow out of the blocks and were punished by the League one side who surged into a two goal lead within the first 30 minutes. Facing a humiliating cup upset, Martinez made two changes at half time bringing on Ross Barkley and Gerard Deulofeu as he adjusted the shape of his side. The switched worked with Everton pulling the game within 15 minutes of the restart level thanks to goals from Mirallas and Naismith. But Barnsley fought back once more with Daniel Crowley, on loan from Arsenal putting the Tykes back into the lead with a fine finish. They would hold the lead for 18 minutes before Lukaku snatch the equalizer to send the game into extra time. In the end Everton’s superior fitness and talent took over as the Barnsley players who had given everything started to fade. An own goal from Marc Roberts and a second from Lukaku finished the game off, handing Everton the win and passage to the next round.

With Chelsea likely to push for the transfer of Stones before the end of this week, it could have been the last time Everton fans see John Stones in the Blue shirt. Some sections of the travelling support did vent their anger towards Stones calling him a rat and telling him in not so polite terms where exactly to go. But a majority of the fans will understand the situation and whilst disappointed to see him go will be appreciative of what he has given to the club over the past two years. For Martinez, who has surely given up hope of retaining Stones, the focus now turns to Saturday’s trip to London to face Tottenham in the late kick off. Spurs are going through a patch of indifferent form at present after failing to win their first three matches of the new season so Martinez will be hoping that they can take advantage of this and walk away from White Hart Lane with all three points, ending this bad week on a positive note.