As the World Cup approaches, thoughts turn to Mexico’s preparations and the squad that will be taken to Russia. The attacking midfield positions are some of the most hotly contested, with Juan Carlos Osorio having plenty of varied creative options. Assuming that Hirving “Chucky” Lozano, Jesús “Tecatito” Corona and Carlos Vela will all make the 23-man squad, and that Víctor Guzmán won’t be fully fit and ready, let’s take a look of some of the other players available, using Performance 100 data to assist analysis.

With over 100 appearances for Mexico, few have the experience of Giovani dos Santos. At 28, in theory this should be Gio’s World Cup, the one where the precocious talent reaches the peak of his powers. This appears highly unlikely though, with recent performances for El Tri and LA Galaxy extremely underwhelming. There are question marks over the desire of the ex-Barcelona youngster, and even more questions regarding whether or not he’s deserving of a place in Russia. Statistically, dos Santos’ numbers from the 2017 MLS season are clearly distinctive to the attacking midfielders he’s being compared to in this article. Gio’s Performance 100 map arguably looks more like one of a central midfielder, rather than an attacking midfielder.

Attacking output (crosses, shots, dribbles, etc) is low, with 68.9 of Gio’s 100 possessions resulting in a non-key, or regular, pass. Efficiency is good, with low numbers for missed passes and failed dribbles and crosses (cross efficiency is quite extraordinary), but the data suggests that recently dos Santos has simply not provided enough creativity to significantly impact matches. An improvement at the start of this MLS season is critical for Gio to nail down his place.

The main concern about Marco Fabián is fitness, with the ex-Chivas creator having played just 23 minutes of Bundesliga football this season. As a result, the graphic looks at Fabián’s stats from 2016-17 in the Bundesliga. Marco impressed last season with his cross efficiency, and although he failed more dribbles than he completed, Fabián was fouled extremely regularly for Eintracht Frankfurt. Perhaps the most impressive stat is the one in the top left corner though, 1.1 goals + assists per 100 possessions, one of the best figures for the players compared in this article, and that’s come whilst playing in the Bundesliga. Marco’s also displayed flexibility during his spell in Germany, often playing on the right-side of the midfield, after spending the vast majority of his career so far through the middle or coming inside from the left. However, Fabián’s low key pass figure is concerning, and surprising.

Javier Aquino displays the numbers of a winger who’s more involved in the early build-up of an attack, rather than latter stages. Aquino rarely attempts shots on goal, and his goals and assists per 100 possessions figure is just 0.44. This makes sense considering the role he plays at Tigres, with the likes of Eduardo Vargas, André-Pierre Gignac and Enner Valencia more advanced. In terms of efficiency, essentially the comparison of successful actions with unsuccessful ones, Aquino sits above the average Liga MX winger in terms of; dribbles, crosses, key passes vs. failed passes and fouls received v dispossessions.

However, the Tigres man doesn’t stand-out as excelling in any part of the game, and whilst consistent good performances can be expected from Aquino, perhaps his lack of a major strength will stand against him as Osorio puts together his World Cup squad. Javier’s defensive capabilities and work rate may salvage his hopes of making it to Russia though. Aquino is known for being able to contribute more defensively than the average attacking midfielder, and his rate of 1.38 clearances per 100 possessions backs up this claim.

It’s rare to see out-and-out wingers completing more dribbles than they fail, but his superb dribble stat isn’t enough to make up for the lack of efficiency in the rest of Jesús Gallardo‘s game. 6.39 failed crosses per 100 possessions for 1.33 completed is a very poor rate, and the low figures for key passes and shots on goal, plus the huge numbers of missed passes, don’t impress. Gallardo may not lose the ball too often when taking on opponents, but there’s been a remarkable lack of end product to his game this season. Considering Gallardo’s height and flexibility, as he can also fill in at left-back (the high clearance figure suggests he’s played in defence at times this season), JCO will likely consider the Pumas man as an option for Russia. But judging by his Performance 100 numbers, which are clearly below the average Liga MX winger, he shouldn’t be given a second glance.

Part of a direct León side, Eliás Hernández evidently creates enormous attacking output, with his non key pass circle smaller than any other player featured in this article. Elías has long been regarded as a superb creator, via crosses and through balls, and his Performance 100 data backs up this belief. Key pass and completed cross numbers are huge, and whilst Hernández does fail a cross 12.7 times out of every 100 occasions that he receives possession, his cross efficiency is still well above average. The average cross efficiency for a Liga MX winger would result in 16.9 failed crosses for 5.47 completions, Elías is performing considerably better than that. These crosses, key passes, and shots, are having impact when it matters most as well, with 1.9 goals and assists per 100 possessions.

Elías appears an excellent option for Mexico if Osorio wants a player that can regularly create opportunities, however, there’s concern over his quality with the ball at his feet. Dribble efficiency is low, dispossessions are high and the León winger barely wins fouls. If Hernández is struggling when taking on defenders in Liga MX, the World Cup is perhaps a step too far.

For those that have long criticised Jurgen Damm of failing to back up his blistering pace with consistent attacking output, these stats provide some vindication. Dispossessions are, somewhat surprisingly, very low, but all other figures don’t make for pleasant reading. Particularly concerning is Damm’s 15% cross success rate, and it’s difficult to see what else Jurgen can offer El Tri. Considering a lack of game time this campaign, it may be felt that purely looking at Damm’s 2017-18 data would be harsh on the right-winger. Fortunately, the tweet from Soccer Nurds, below, compares Damm’s three previous seasons.

A clear regression in performances can be seen when comparing Jurgen Damm’s previous three Liga MX campaigns with Tigres. Back in 2015-16, Damm certainly looked good enough to be considered for a Mexico call-up, but banking on him re-discovering that form would be a risky decision.

If Osorio is looking for an attacking midfielder that can play in multiple roles, Rodolfo Pizarro must be considered. Pizarro, who began his career as a right-back, can play as a traditional ‘number ten’, a direct inside-forward, regularly attempting to get in-behind opposition defences, and even a box-to-box midfielder. Wherever he plays, the Chivas man offers excellent dribbling ability (the highest number of completions per 100 possessions in this comparison), creativity and good shooting proficiency, as his stats show. Pizarro also has impressive stamina, speed and work ethic.

Statistically, the main concern is the large dispossessions number. Dispossessions are occasions when possession is lost whilst a player isn’t attempting a dribble, pass, cross or shot. Exactly why Rodolfo’s dispossession figure is so high is unclear, but it’s certainly a worry that he’s losing the ball at such regularity. Furthermore, whilst the tactically flexible Osorio will probably like Pizarro’s ability to play in multiple roles, it could be seen as a weakness of his game. Pizarro may benefit in the future by specialising in a certain role and maximising his talents that are specific to this role. 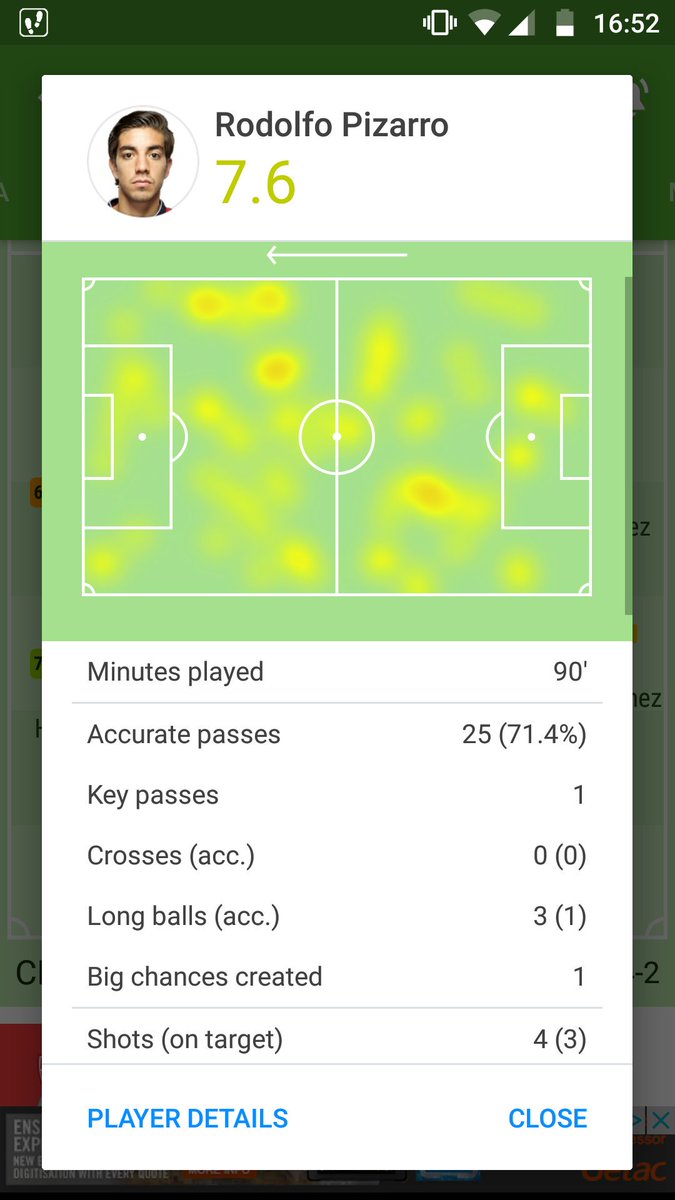 Arturo “Ponchito” González was a forgotten name. A prospect of yesteryear failing to receive regular football in an outstanding Monterrey team. But all has changed in recent weeks. Ponchito has worked his way into Antonio “Turco” Mohamed’s starting line-up, and has even prompted Turco to alter his formation in some recent matches, using Ponchito as a ‘number ten’ in a 4-2-3-1, rather than the 4-3-3 we usually saw in the Apertura. Arturo has impressed, and statistically dribble and shot efficiency is excellent, as is Ponchito’s 4.91 key passes per 100 possessions. On the other hand, figures for missed passes, failed crosses and dispossessions are rather high. Certainly an outside option, but whilst these stats wouldn’t instantly attract attention from Osorio, if Marco Fabián isn’t fully fit and Giovani dos Santos is deemed to be too out of form, then Ponchito might become a possible ‘number ten’ option.

Javier “Chofis” López has phenomenal numbers this season. Just compare him to teammate Rodolfo Pizarro. More shots on goal per 100 possessions, with fewer missed shots, slightly fewer dribbles completed for significantly less fails, not far off twice as many key passes, more crosses at a much better completion rate, around half the number of dispossessions andmore fouls received. Chofis greatly outperforms Pizarro, and stands out amongst the attacking midfield competition in this piece. One stat raises alarm bells though. Despite this fantastic attacking output, at incredible efficiency, Chofis gets a goal or an assist just 0.55 times out of every 100 possessions. Nearly half Rodolfo Pizarro’s figure, with the pair averaging almost identical possessions per 90 minutes. There’s an element of misfortune about this figure, Chofis has picked up two assists from seven big chances created, with Pizarro getting six assists from the creation of eight big chances.

Evidently Lopez’s Chivas teammates are failing to regularly put home the opportunities that he makes. However, it’s curious that Pizarro has created eight big chances from 41 key passes, whilst Chofis has seven big chances created from 68 key passes. The data suggests that Chofis is creating more, at greater efficiency, but Pizarro’s creations are more likely to result in goals. Analysis of expected assists would be required to dig deeper. Chofis is yet to become the complete package as a creative player, but his Performance 100 numbers prove that López is a fantastic attacking midfield option, who deserves lengthy consideration for the 2018 World Cup squad. As an unknown quantity to the rest of the world, he has the potential to provide a surprise spark to the Mexico attack.

The Performance 100 idea was developed by Tom Harrison, with raw data provided by Sofascore and graphics produced by Soccer Nurds