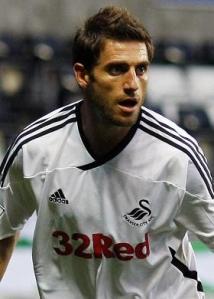 Jack Wilshire’s comments earlier this week about Steven Gerrard being a strong role model for children watching the Premiership are reasonably justified. Whist Gerrard has not been totally squeaky clean in his career, his professionalism on the pitch for both Liverpool and England as well as his lifestyle off of it, make him a better role model than most in the league. As a devoted father of three girls, Gerrard prefers to spend his time away from the pitch with his family, rather than join his teammates at local nightclubs or partying. He is one of only a handful of players that parents with kids watching the Premiership would want their child to emulate in the future. International colleagues John Terry and Ashley Cole less so.

But for Swansea fans, there is one player in particular who has stood out as a good role model for their kids, Spanish defender Angel Rangel. The defender, signed in 2007 from spanish second division outfit Terrassa FC has been a regular starter for the Swans this season and is already a popular figure with the home support but a recent event has made the fans appreciate him even more. The story started after Rangel finished training last Friday and headed home to see his wife. After an hour or so at home, Rangel and his wife Nikki decided to head out to get some food at a local sandwich shop, despite the poor weather conditions outside. After arriving at the shop and purchasing something to eat, the couple overheard the manager of the store saying that he was going to throw the remaining sandwiches from that day into the rubbish bins. On hearing this, Angel and his wife asked the owner if they could take all the left over sandwiches and food and give them to the homeless instead, to which the owner agreed.

After driving around for an hour looking for people sleeping rough in Swansea with little success, and with the weather conditions deteriorating, they decided to turn to twitter and ask for help. Rangel, who has 26,000 followers on twitter, tweeted “Anyone knows the location of homeless people in Swansea? I got food going spare! #randomtweet”. Moments later he was contacted on twitter by several people giving him the names of some local homeless shelters, which Angel and his wife then drove to.

In an interview with CNN, Angel talked about the night and why the couple had decided to give back:

“We went for something to eat in a local sandwich chain and overheard the manager saying they had to throw out bags of sandwiches as they were about to close for the night. My wife, Nikki, who is a very caring and charitable person, asked if we could have them for the homeless rather than see them thrown in the bin. They agreed and we drove around Swansea for over an hour, but couldn’t find any homeless people as it was so cold out on the streets with all the snow. We decided to tweet a plea and we were guided to a local charity shelter who looked after the homeless.”

As the news spread across Twitter, fans clambered to tweet their appreciation for what Rangel and his wife were doing. For himself, he didn’t think it warranted the praise remarking that it was only a little gesture but did thank posters for their kind words and comments. They now feel at home in Swansea after six years are planning to make this a regular occurrence as they look to give something back to the city that has helped them. There will be some who doubt the validity of the story and will speculate that Rangel’s kind act was nothing more than publicity mongering but to most it will be seen for what it is – a decent human being aiming to help someone else poorer than themselves. What better role model could you ask for, for your kids, than Rangel.