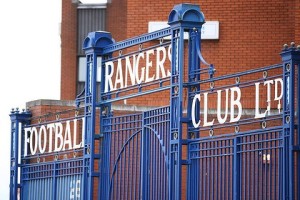 Rangers fight with the football authorities within Scotland continues as the countries three football bodies announced its plans to restructure. The proposed new structure of 12-12-18 would see a reduction of the overall leagues from 4 to 3 with the SPL and Division 1 adding 2 more clubs to it ranks. The problem and for what Rangers feel aggrieved is that the final two leagues will be combined resulting in no promotional places for the winners of the current Division 3, which Rangers currently lead by a comfortable margin. Understandably it’s another blow to owner Charles Green’s plans to get the club back to where they feel they belong – the SPL. With another year languishing in the lower divisions added in to the mix, Rangers could find themselves back in the financial peril that they have worked so hard to recover from.

The 54-time Scottish champions are keen to be part of the discussions about the much needed revamp of the leagues but so far have not been included as they are deemed too low down the totem pole to have a voice. But with one of the largest followings in Scotland and an average 50,000 people turning up to home games at Ibrox, it appears to be yet another slap in the face by the SFA. Green is keen to get to the table to pitch his idea of three leagues of 14 teams, which to many makes more sense but the powers that control the game seem hell bent on continuing down the path they have suggested. To be fair, the new league structure proposed is a vast improvement on the existing format as Scotland’s depth in quality is limited to its top tier and a handful of lower clubs, including Rangers.

The bad blood that exists between Rangers and the SFA and SPL stems from their financial irregularities that have plagued the club in the last two years. Bad management, in addition to the development of payment schemes so grey that no-one can clearly decide if they are legal or not, led to Rangers dropping into administration which allowed the SPL and SFL to condemn Rangers to its lowest division. The Glasgow club deserved their punishment, no matter how harsh some may think it was, but now the punishing should stop. Sitting in the 3rd Division, with a diminished squad, Rangers are on the road to recovery, now more financial stable than ever before and regularly fielding a new crop of youngsters that could one day become Scottish internationalists. However Green believes that the Scottish authorities are not helping in any shape or form by changing the formats without consulting his team.

Green and his team are continuing to look at options including leaving Scottish football for good. Talk of a European elite league or Atlantic League has been doing the rounds for nearly a decade with Rangers and city rivals Celtic keen to join the likes of PSV, Porto and Anderlecht in a breakaway league. It hasn’t gained any traction and presents too many problems to resolve quickly, namely gaining approval from UEFA and FIFA. The same approval would be needed if Rangers alone were to leave Scotland for pastures new. Another option touted regularly has the old firm joining the English Premiership, an idea which is backed by managers like Sir Alex Ferguson, David Moyes and Harry Redknapp who see the values of adding two of Europe’s biggest clubs to its ranks. Others are more skeptical such as Wigan owner Dave Whelan who rightly so is protective of Wigan’s place in the league, which would surely be at threat if such a move, was to happen. The idea has also been squashed by Richard Scudamore, the Premiership’s chief Executive, who publically announced that “Rangers and Celtic will never play in the Premiership whilst I am in charge”.

Scudamore’s defiance may be tested if Green goes ahead with option number three, a potential move to the English Conference leagues. A move would get them in to the English setup and with five promotions would see Rangers in the Premiership, with Scudamore unable to prevent it from happening. A move to the conference may take longer to get o their chosen destination, but for Green the level in which the club would be playing in would be much strong, even in the lower leagues. With Cardiff and Swansea both competing in the English leagues, there is already the precedent and with Conference chairman Brian Lee giving his backing to conversations, this could be the clearest path for Rangers and Green to take.

Green has yet to come publically about Rangers next steps but has released a series of statements to the media that give indications of the direction he wants to go in:

“ The recent widespread debate on the reconstruction of Scottish football has been welcome and I am glad that Ally McCoist and myself have contributed and helped stimulate discussion rather than watch everyone sleepwalk into a solution that very few, if any, football fans across Scotland want. To be absolutely clear, it would have been easy for me, on behalf of Rangers, to support this model. There is no model on the table that offers our club a potentially quicker route back to the highest echelons of Scottish football. However, I believe that while all clubs have to look out for their own interests, the greater good of Scottish football cannot be ignored.”

“I would like to set out what Rangers believes to be a workable way forward that may appeal to fans of all clubs. First, we think any reconstruction should be implemented not next season but the following season so that every club knows what it is playing for at the start of the season. Secondly, we believe that further consideration should be given to a 14-14-14 model, which can be constructed in a way that ensures there is no loss of games but will deliver greater competition through the leagues, particularly with the implementation of play-offs. Finally, I am fully aware of the unique challenges a club the size of Rangers face in Scotland. That is why we must explore all options for the long-term, including playing out with Scotland.”