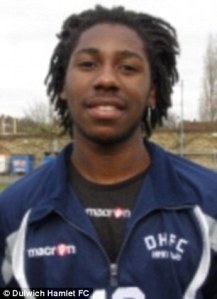 Since the realisation by Brendan Rodgers that his striking options at Liverpool were somewhat limited, he has been on the look out for players. With only Borini and Suarez as the clear defined strikers in the squad, Rodgers splash out £12 million to bring in Daniel Sturridge during the January transfer window from Chelsea. But Rodgers knows that he still needs to strengthen further if he is going to compete in multiple competitions next season. Having crashed out of all the domestic and european cups that Liverpool were contesting, Rodgers focus is now on finishing strongly in the league and then rebuilding for next years attack. To date, the club has been linked with a variety of top named strikers including Newcastle’s Papiss Cisse, Schalke forward Klaas-Jan Huntelaar and Celtic striker Gary Hooper but his latest target has taken many by surprise.

The latest player linked with the Anfield club is a 18-year-old non league striker who has been tearing up the league with his impressive goalscoring abilities. Having hit 23 goals in 23 games for non league side, Dulwich Hamlet, Daniel Carr is now attracting the attentions of some of England’s biggest clubs. Along side Liverpool, a host of Championship and Premiership clubs like Chelsea and Manchester City have sent scouts down to watch the young forward and have all come back with glowing reports. Keen to get their hands on the player, Rodgers has invited Carr to train with the club and take part in a few reserve games to see if his talent is transferable to the bigger leagues. The trail will last only a couple of days and then Liverpool will likely speak to Dulwich Hamlet boss, Gavin Rose if they are keen to move things on further. But Rodgers and Liverpool know that if he does impress, they will have to act fast as the Premiership vultures circle above.

Carr was a relatively unknown in football until his performances at Hamlet caught the attention. A former Reading academy player, he was released by the club last summer after failing to make the grade as a winger. After a few trials, Dulwich Hamlet saw something special in the player and offered him a contract. Originally signed as a winger, it was Rose that switched him to centre forward and it turned out to be the best decision he ever made as the players combination of power finishing and sublime pace tore up the non league defences like a hot knife through butter. Now, it appears it is only time before Carr leaves the club and joins a team higher up the divisions, likely pocketing Hamlet a nice payout at the same time. Until that time comes, Rose wants to keep the players feet very much on the ground in an attempt not to derail Hamlets impressive start to the season.

Dulwich Hamlet has a reputation for finding, nurturing and then selling on players to clubs higher up and it forms a useful base layer of revenue that keeps the club running. In the past few years, Hamlet have sold defenders Paul McCallum to West Ham United and duo Michael Chambers and Quade Taylor to Crystal Palace. But its their history of producing great players that puts them in contention for one of England’s best non league breeding grounds. Players like Ian Wright, Simeon Jackson, Marlon King and Peter Crouch have all played for Dulwich at some point in their early careers. Even current Newcastle boss Alan Pardew starred in the Hamlets midfield for two years during the early eighties. But much of the credit for the current crop goes to Rose, who has worked hard to find new players, offer them a new platform and develop them as players. It’s a back-breaking job to be constantly rebuilding your team as star players are sold off to balance the books but Rose has coped well and has his team now sitting third in the Isthmian League South with 5 games left to go. To achieve promotion, Rose will know that he needs to hold on to Carr until the end of the season but it may be too hard a task especially if contracts from the larger clubs start flowing in. Regardless Rose will be happy with what he has achieved with the young striker and will wish him the best for his new future back in England’s top division.